Vietnam's aviation market will play a key role in the aviation growth in Southeast Asia in the next 20 years, and the country’s fleet is expected to quadruple by 2038, according to an official from Boeing Commercial Airplanes. 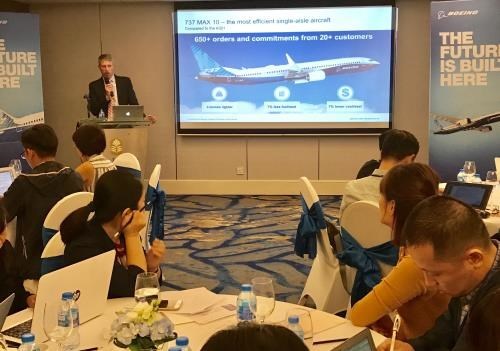 At a press conference on the airline marketheld in Hanoi on October 24, Managing Directorof Market Analysis & Sales Support at Boeing Commercial Airplanes Darren Hulst predicted thatregional airlines will need 4,500 new aircraft in the period from now to 2038,and the growth will lead to an increase in demand on commercial aviationservices

According to Hulst, Vietnam's aviation industry recorded impressive growth inthe past five years, with the number of passengers tripling and the number ofaircraft doubling.

Vietnam is forecast to have the growing middle class inSoutheast Asia, he said, adding that the country has become one ofthe fastest growing aviation markets in the world, along with the strongdevelopment of domestic and international tourism.

He predicted that the single-aisle aircraft will continue to play a key role inVietnam’s fleet used on domestic and regional routes.