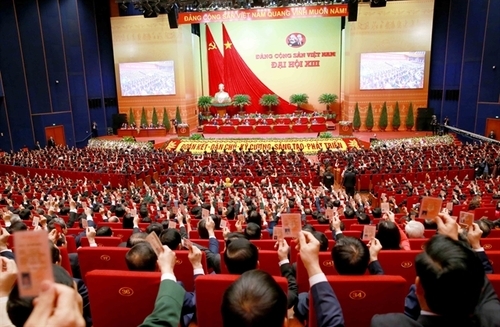 Party delegates voted to adopt the Resolution of the 13th National Party Congress at the final session of the Congress held on February 1, 2021.

The goals are part of the Resolution of the 13th National Party Congress held from January 25 to February 1, the entirety of which has just been released by the Office of the Party Central Committee.

The Resolution noted the highlight of the 12th tenure was the successful handling of the COVID-19 pandemic resulting in significant economic achievements – including stable macroeconomics, controlled inflation and high GDP growth, while people’s living standards were improved. The fight against corruption, loss and waste was intensified, while the socio-political situation remained stable, foreign relations deepened and Vietnam’s profile on the international stage grew.

However, numerous shortcomings – including slow modernisation and industrialisation, shifting in the growth model, limited competitiveness and quality and productivity of the economy, inadequate adaptation to climate change and environment protection demands, drawbacks in Party building and rectification, that science and technology has not been the driving engine of socio-economic growth and the lives of certain groups of people remain difficult – of the 12th tenure have been identified in the Resolution.

Amid rapidly shifting and complex developments in the global scene, the Party Platform continues to serve as the ideological flag to gather the collective strength of united peoples for the goal of a "prosperous-people, strong-nation, democratic, equitable, and civilised" Vietnam.

In the coming years, the challenges and opportunities of a complicated world demand the entire Party and Vietnamese people to “unite” and continue to have major changes in mindset and make correct and timely forecasts of the situation to prepare and deal with any circumstance, to “bring the country forward on the path of rapid, sustainable development” and the attainment of many orientations, goals, and tasks.

The Resolution lists major guiding orientations of the years forward, including “persistent and innovative” implementation of Marxist-Leninism and Hồ Chí Minh ideology, persistent pursuit of socialism and independence and upholding national interests based on the principles of the United Nations’ Charter and international law and the spirit of equal and win-win co-operation, with national defence and security in mind.

It also aims to enhance patriotism, the spirit of resilience, national unity and people’s aspirations to develop a prosperous and happy nation, promoting socialist democracy, enhancing the quality of human resources and promoting innovation and science and technology – especially the achievements of the Fourth Industrial Revolution – in service of the country’s sustainable and rapid development.

In addition, Party building and governance are goals, working towards a streamlined and effective Party system with quality cadres and civil servants.

The “general objectives” are identified as improving the Party’s leadership and ruling capacity; building a pure, strong and comprehensive Party and political system; consolidating and raising people’s confidence in the Party, the State and the socialist regime; fomenting aspirations to develop a prosperous and happy country; promoting the will and strength of national solidarity; promoting comprehensive and synchronous đổi mới (reforms), industrialisation, and modernisation; building and firmly defending the Fatherland, maintaining a peaceful and stable environment; and striving to become a developed country with socialist orientations by the middle of the 21st century.

In 2021-25, the Resolution sets a target for average GDP growth of 6.5-7 per cent, GDP per capita by 2025 reaching $4,700-5,000, the contributions of total factor productivity (TFP) in economic growth reaching 45 per cent, the labour productivity increase hitting 6.5 per cent a year, urbanisation reaching 45 per cent, the ratio of processing and manufacturing industries in the GDP exceeding 25 per cent, and the digital economy accounting for 20 per cent of the country’s GDP.

In this time frame, the Resolution aims for agricultural labour ratio staying at 25 per cent, the ratio of trained labour reaching 70 per cent, urban unemployment kept at below 4 per cent, the rate of multidimensional poverty maintaining a decrease of 1-1.5 per cent year-on-year, aiming for 10 doctors and 30 hospital beds for every 10,000 people, striving towards 95 per cent of the Vietnamese population being covered under the State’s health insurance, life expectancy reaching 74.5 years, and the ratio of communes obtaining new rural standards reaching at least 80 per cent, including 10 per cent meeting the requirements of exemplary new rural standards.

In terms of environment, by 2025, the goals are to have 95-100 per cent of the urban population and 93-95 per cent of rural population having access to clean and hygienic water, 90 per cent of urban waste properly collected and treated, 92 per cent of active industrial-processing zones outfitted with proper wastewater treatment facilities; 100 per cent of all businesses polluting the environment punished; and upholding the national forest coverage at 42 per cent.

The fourth central task is inspiring patriotism among the people to develop a prosperous and happy nation, promoting the role of cultural values and the strength of Vietnamese people in nation-building and defence, with detailed policies to develop the culture of ethnic minority groups, carrying out social policies and ensuring social security for the people, raising living standards and happiness indexes of the Vietnamese people. Fifth is perfecting the legal system, institutions, and policies to promote socialist democracy. The final central task is to strictly manage, reasonably and effectively use land and natural resources, protecting the environment, and implementing adaptation measures to cope with climate change and natural disasters.

Regarding institutions, the Party identifies the need to improve development institutions for a socialist-oriented market economy; reforming State governance towards modernity and competitiveness; improving the legal system and institutions to create a favourable, healthy, and fair business and investment environment for all sectors of the economy where innovation can foster; mobilising, managing and using all resources – especially land, finance, public-private partnership – for development purposes; bolstering reasonable decentralisation, while enhancing inspections and keeping powers in check via the legal system.

For human resources, the Party wants a priority on high-quality human resources for leadership and management and key positions, based on “comprehensive and radical transformation of education and training quality in tandem with recruitment and incentive policies”; promoting research, transfer, application and development of science and technology, innovation; promoting the aspirations for national development, people’s sense of unity and national pride in nation-building and defence efforts.

The Resolution also states the demand for "modern and synchronous" social and economic infrastructure, with a focus on national key transport projects, climate adaptation projects, and information and communications projects to serve national digital transformation and the development of a digital economy and society.