Vietnam is confident that it will be able to produce Covid-19 vaccines to meet the country’s need and for export by 2022.

On March 15, the Hanoi Medical University and the National Institute of Hygiene and Epidemiology started the first phase of the clinical trial of Covivac vaccine on the first six volunteers.

During phase 1 of the trial (March 15 to April 20), the vaccine will be tested on 120 volunteers aged 18-59, divided into five groups, including one group injected with a placebo. 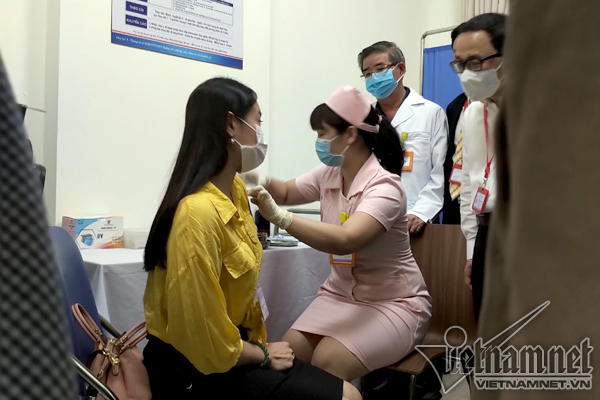 The first volunteer who was tested for the locally made Covivac vaccine. Photo: Hoang Bui Hai

One of the first volunteers injected with the locally-made vaccine on March 15 was a 44-year-old woman from Hanoi. She told VietNamNet that she had studied very carefully about the vaccine and strongly believed that it would be successful.

“I am very lucky that my husband and daughter are very supportive. So far, I have not felt any unusual reactions," she said.

Deputy Health Minister Tran Van Thuan said that Covivac is the second Vietnamese vaccine under clinical trial after Nanocovax, which is now in phase 2 of the trial. In the near future, Vietnam will have another Covid-19 vaccine Vabiotech that will be tested in stage 1.

He said that the Ministry of Health highly appreciated the preparation and efforts of scientists, especially those from the Institute of Vaccines and Medical Biologicals (IVAC) who worked very hard to make the vaccine in a very short time.

The Department of Science and Technology under the Ministry of Health, the State Council, the Ethics Council in the field of biomedical science have worked to shorten the time for the early ratification of the research protocol.

"We especially thank the volunteers for their noble acts, for the public's health, so that we have enough people to participate in the research," said Thuan. 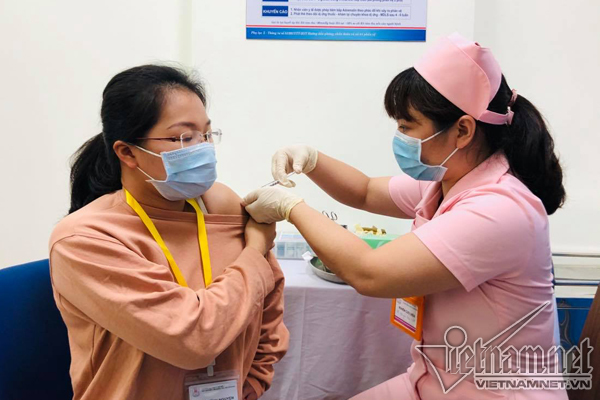 The third volunteer who was injected with the Covivac vaccine.

In the first phase of the Covivac vaccine trial, Thuan said that Vietnam respects the principles of science, strictness and safety.

The Department of Science and Technology of the Ministry of Health was assigned to monitor, supervise and evaluate the entire experimental research process, creating the most favorable conditions for scientists so that as soon as phase 1 is evaluated, phase 2 will be implemented immediately.

“This is a vaccine that we have high hope for its success because it was born from the dedication of scientists at home and abroad. This vaccine has also undergone a pre-clinical trial study in Vietnam, India and the US, which initially proves that the vaccine is not only effective for common strains but also mutant strains in the UK and South Africa," Deputy Minister Thuan emphasized.

Thuan said that if Covivac vaccine succeeds, the vaccine along with NanoCovax and Vabiotech will help Vietnam take the initiative in sourcing Covid-19 vaccine to meet the country’s needs. 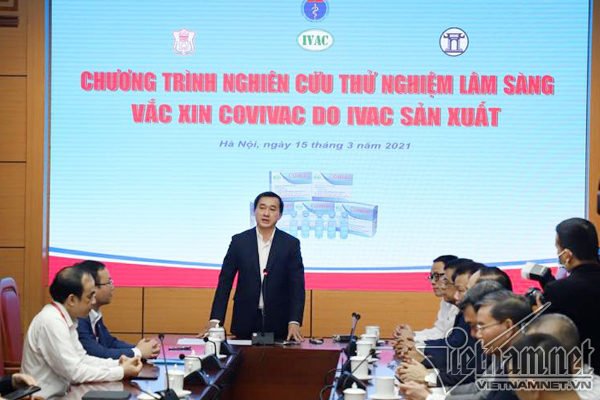 According to the Ministry of Health, IVAC bought insurance for all people who participate in the trial, with a total value of VND40 billion (nearly $2 million). This is compulsory not only in Vietnam but in other countries.

Answering VietNamNet's question about the information that the production technology of Covivac vaccine is similar to that of AstraZeneca vaccine, Dr. Duong Huu Thai, Director of IVAC, said that both vaccines use vector technology, but the substrate is different.

Covivac vaccine has been developed since May 2020 with the goal of producing a complete vaccine to meet international conditions after 18 months at a low cost.

This is a liquid, preservative-free vaccine with three kinds of doses of 1mcg, 3mcg and 10mcg, including two types with and without adjuvants.

Currently, IVAC's capacity is 6 million doses per year, but by September it can be upgraded to 30 million doses a year. The estimated price of the Covivac vaccine is about VND60,000/dose (less than $3).

AstraZeneca vaccine will continue to be used in Vietnam

No cases of blood coagulation have been recorded in Vietnam, so the vaccine will continue to be used as planned.