Magazine Travel + Leisure of the United States has made a list consisting of some eight countries, including Vietnam, that offer retirees an opportunity to enjoy a comfortable lifestyle and a lower cost of living.

According to details given by Travel + Leisure, the nation is a very affordable place to retire in, especially for adventurous retirees who appreciate the country's beaches, scenery, food, history, and culture. Indeed, the overall cost of living is approximately 49% lower than in the US, with rents are about 75% lower, depending on the location.

Since the Government owns all of the land and foreigners are restricted from purchasing property, the majority of expats and retirees rent, an economical way to in which to live. Although obtaining a visa is not as straightforward in Vietnam as it is in many other countries, it's possible to apply for long-term stays or business visas, the New York-based travel magazine commented.

Furthermore, high-quality health care is also very affordable, with both public and private systems available. In line with this, most expats carry international health insurance and take advantage of private hospitals, it added.

Travel + Leisure quoted International Living as saying that Hoan My Medical Corporation, with hospitals and clinics around the country, is the most prestigious hospital group. "City International Hospital in HCM City is the biggest international hospital, where a quarter of the patients are foreigners and most of the medical staff speaks English," it states.

Vietnam is notable for being the only Asian destination to make the list. The other cheapest countries to retire in globally include Mexico, Ecuador, Costa Rica, Portugal, Panama, Montenegro, and Colombia. There remained more than 1.97 million poor and near-poor households nationwide based on the multi-dimensional poverty standards, according to a survey conducted by the Ministry of Labour, Invalids and Social Affairs (MoLISA) in 2022. The prospect of economic growth and market upgradation is the driving force to attract cash flow into the stock market. 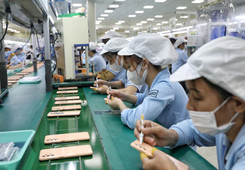 Solving housing issues for workers a key target for the labour sector: PM

Prime Minister Pham Minh Chinh highlighted creating more jobs, improving labourers' skills and giving priority to solving the housing issues of workers as the key tasks of the labour sector during a meeting in Hanoi on Wednesday. HCM City to face economic challenges, recovery to be hit

HCM City is likely to face hurdles caused by a global recession this year and escalating uncertainty, Deputy Chairman of its People’s Committee Duong Anh Duc has warned. 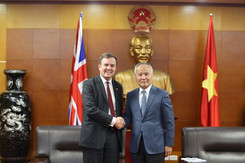 British official in Vietnam to boost accession to CPTPP

Minister of State Greg Hands of the UK Department for International Trade arrived in Hanoi on February 1 for high-level trade talks on how the UK joining of the CPTPP will boost the economic firepower of the world’s most dynamic trade bloc. 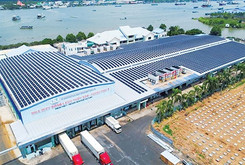 Vietnam must step up carbon reduction to enter EU markets

Vietnam must start monitoring and issuing carbon certificates to exporters and retailers in response to the EU's recently passed carbon levy, said industry insiders and policymakers.