The Vietnam Atomic Energy Institute (Vinatom) in 2019 obtained harmony between scientific research and strengthened application of research results in many different industries and spheres, Russian Counseller to Vietnam Sergei Tanakov said during the 2019 reviewing ceremony. 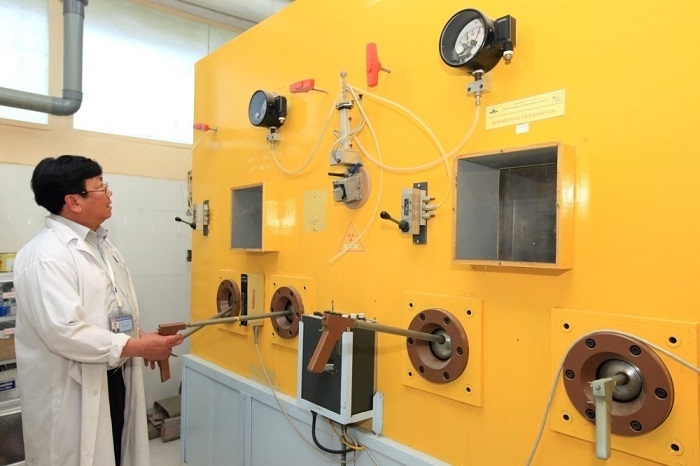 The greatest significance of the production work is providing radioisotopes at prices much lower than import prices. The higher the supply is, the bigger the benefits.

The volume of radioisotopes the Da La nuclear reactor provides to radiology and nuclear medicine all over the country has been increasing steadily (up by 63 percent compared with 2018 and 140 compared with 2011-2018).

The supply frequency has also increased, from once every three weeks to once every two weeks and then once a week. This reduces the number of patients receiving treatment at the same time, thus helping cutting overloading at hospitals.

In order to have new medicines, the process of preparation of Yttrium (Y-90) used to treat primary and metastatic liver cancer, the product of a research project under the KC05 Program (Ministry of Science and Technology), will be ready in 2020.

The contribution of atomic energy to the economic development in 2019 could also be seen in the participation in maintenance activities and non-destructive evaluation in large facilities such as Nghi Son and Dung Quat Oil Refineries and the thermal power plants of Vinh Tan, Vung Ang, Phu My, Duyen Hai and Mong Duong.

One of the most important jobs done in 2019 was the examining of carbon steel in stainless steel welds at Nghi Son Oil Refinery conducted by CANTI (Center For Applications Of Nuclear Technique In Industry).

“There were problems in thousands of welds. But there was no method to check which welds had problems,” he explained.

CANTI then designed and installed a specialized machine capable to detect faulty welds and then classified the welds. Finally, Nghi Son found the errorneous welds and fixed them.