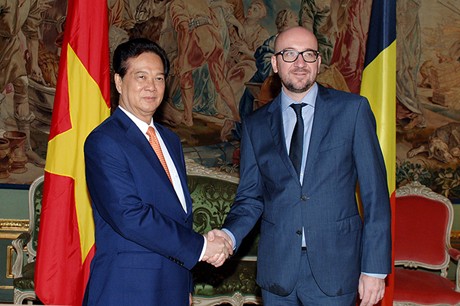 During the October 13 talks with his Vietnamese counterpart PM Nguyen Tan Dung, Charles Michel affirmed the need to enhance the relationship between Belgium and Asia-Pacific nations, particularly Vietnam, at both bilateral and multi-lateral frameworks.

He voiced strong support for the signing of the EU-Vietnam Free Trade Agreement (EVFTA), noting that the trade pact and the frame agreement on the Partnership and Cooperation Agreement (PCA) between Vietnam and the EU will lay a firm foundation for stronger all-sided cooperation between the two sides.

The Belgian PM expressed hope that his Vietnamese counterpart’s current visit will help deepen bilateral ties for mutual benefit, as well as for peace, stability, cooperation and prosperity in the region and the world.

PM Dung spoke highly of Belgium’s success in dealing with negative impacts caused by the global economic and financial crisis and help the country's stable economic growth bounce back.

They consented to continue promoting high-level exchange visits and cooperation, and providing mutual support at multilateral forums like the UN, ASEM, ASEAN-EU, and the Francophone.

They described the ASEM as an important dialogue channel and cooperation programme between the two continents, in which Vietnam and Belgium play a key role.

Both sides expressed their pleasure at positive results of cooperation programmes, particularly the 2011-2015 Development Orientation Programme, and asked the Joint Committee to work out specific cooperation promotion measures after 2015.

They said culture and education cooperation is a bright example of the Vietnam-Belgium relationship, and vowed to create the best possible conditions for universities and research institutes to foster cooperation and share experience.

They also discussed issues related to cooperation and security in the Asia-Pacific region, laying emphasis on peace, stability, security, and free and safe navigation and aviation in the East Sea.

The two government leaders agreed that disputes on territorial sovereignty should be resolved peacefully without the use of force or threat to use force in accordance with international law, including the 1982 UN Convention on the Law of the Sea (UNCLOS) and the Declaration on the Conduct of Parties in the East Sea (DOC) towards the building of a Code of Conduct in the East Sea (COC) in the near future.

After the talks, PM Dung and PM Charles Michel witnessed a ceremony granting an investment license to Belgian company Rentaport in northern city of Hai Phong's Cat Hai island and the signing of a loan agreement from the Belgian government for Vietnam's small satellite project VNREDSAT 1B.