The 15th meeting of the Vietnam-Cambodia Joint Committee on Economic, Cultural and Scientific-Technological Cooperation took place in Phnom Penh on March 15.

The 15th meeting of the Vietnam-Cambodia Joint Committee on Economic, Cultural and Scientific-Technological Cooperation took place in Phnom Penh on March 15. 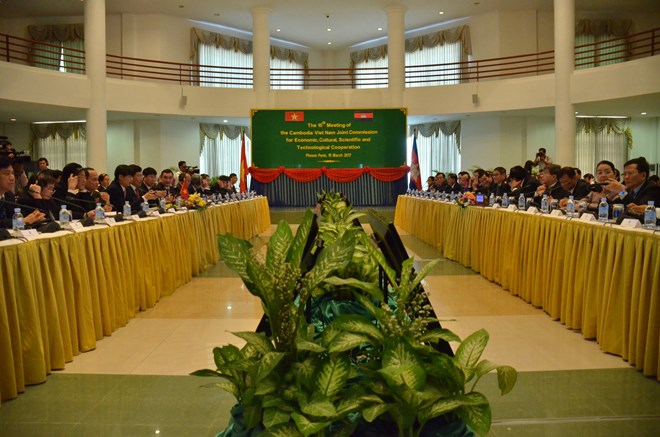 The 15th meeting of the Vietnam-Cambodia Joint Committee on Economic, Cultural and Scientific-Technological Cooperation takes place on March 15

The two sides reviewed the implementation of cooperation agreements signed at the joint committee’s 14th session and expressed their satisfaction at the growing bilateral friendship and cooperation, which have brought practical benefits to the two countries’ people.

They highlighted regular high-level delegation exchanges in 2016, including the visits by President Tran Dai Quang in June and National Assembly Chairwoman Nguyen Thi Kim Ngan in September to Cambodia, and the official visit to Vietnam by Prime Minister Samdech Hun Sen in December.

As of the beginning of 2017, nearly 4,000 Cambodian students were pursuing education and research in Vietnam. Vietnam has topped the list of tourist numbers to Cambodia over the past eight years. Two-way trade hit 3 billion USD in 2016.

During the meeting, Vietnamese and Cambodian officials discussed orientations and measures to increase comprehensive cooperation in the coming time.

They agreed to boost affiliation in education-training, economics, trade and investment as well as remove difficulties for the effective implementation licensed projects, while seeking tosign new cooperation agreements to raise two-way trade to 5 billion USD in the time ahead.

Both sides also agreed to bolster coordination in natural resources and environment, agro-forestry-fisheries, energy, oil and gas, labour, and healthcare in addition to forging connectivity between the two economies, especially in the fields of transport, telecommunication, finance, banking, and tourism.

They consented to carry out an agreement on investment protection and encouragement and work for the early signing of agreements on avoidance of double taxation, border trade, and labour cooperation, along with a Memorandum of Understanding on transport cooperation strategy in 2017-2025, with a vision to 2030.

The two countries confirmed their determination to complete the land border demarcation and marker planting as soon as possible, and tighten coordination in searching for and repatriating the remains of Vietnamese soldiers killed during wartime in Cambodia.

Vietnam and Cambodia reiterated the principle of not allowing any hostile forces to use one country’s territory to conduct activities undermining security of the other country.

They agreed to ensure the legitimate rights of each other’s citizens in the respective countries.

Both nations emphasized the importance of sustainable use and protection of water resources in the Mekong River, whilst enhancing cooperation with other countries within the framework of the Greater Mekong Sub-region (GMS), Mekong River Commission (MRC), Cambodia-Laos-Vietnam Development Triangle, Cambodia-Laos-Myanmar-Vietnam (CLMV), Ayeyawady-Chao Phraya-Mekong Economic Cooperation Strategy (ACMECS), Association of Southeast Asian Nations (ASEAN), and Asia-Europe Meeting (ASEM), and other international forums.

They expressed their belief that the outcomes of the meeting will lay an important foundation for the two sides’ ministries and localities to push ahead with cooperation in the coming time, which will help propel the bilateral sound neighbourliness, traditional amity, and comprehensive, sustainable and long-term cooperation forward.

The 16th session of the joint committee will be held in Vietnam in 2018.