Road transport makes up 85 percent of total emissions, an overwhelming proportion over other segments. 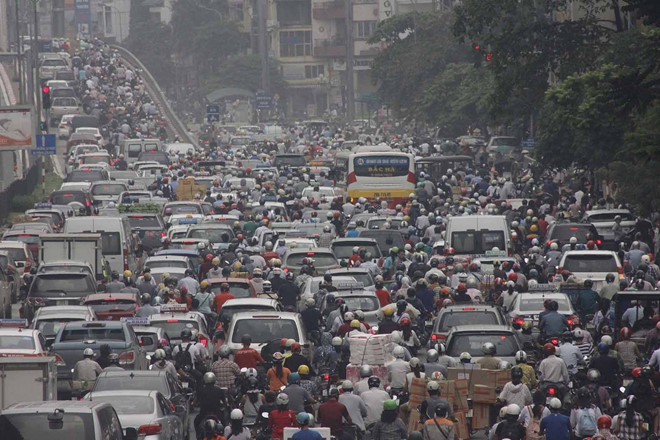 Road transport is the biggest source of emissions as it generates 85 percent of total emissions, followed by internal waterway transport with 8 percent which remains unchanged in 2020-2030, airways 5 percent, and sea transport 2 percent. Railway generate the smallest volume of emissions.

The World Bank report on addressing climate change issues in transport in Vietnam shows that increased income and travel demand are behind the rise in fuel consumption and emissions to the environment.

Vietnam's mechanization has led lower emission vehicles (motorbikes and light trucks) being replaced by higher emissions vehicles (cars and heavy trucks), thus leading to the increase in emissions per capita.

Vehicles discharge large amounts of substances such as dust, CO, NOx, SOx, gasoline vapors, lead dust and benzene during the operation process, thus causing air pollution. The emission of motor vehicles depends heavily on the quality of vehicles. Old cars and motorcycles with many years of use are a cause of serious pollution.

Road transport has a close relation to logistics costs and greenhouse gas emissions. Economic growth in Vietnam depends on the increase in volume of transported goods and trade.

As the major mode of goods transport in Vietnam, road transport undertakes 77 percent of domestic transport volume, while logistics costs account for about 21 percent of GDP, a high rate compared to the world.

Experts from the World Bank recommended that the most effective solution to reduce the greenhouse gas emissions by 2030 is applying new standards on fuel efficiency standards for cars and motorcycles. This would help reduce 15.8 million tons of CO2 emissions compared with normal scenario in 2014-2030.

According to Vu Hai Luu from the Environment Department, in implementing the strategies to cope with climate change strategies and plans, MOT strives to actively develop transport in a sustainable and friendly manner and to reduce greenhouse gas emissions.

Air pollution in Hanoi has risen to serious levels over the past two days.