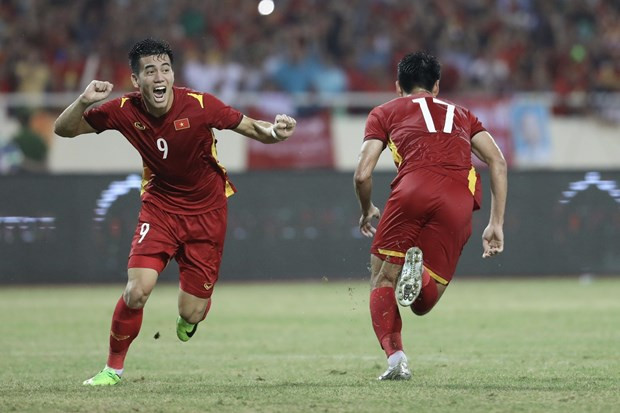 Nham Manh Dung (17) scores the only goal of the match, securing Vietnam's win against Thailand. (Photo: VNA)
After the whistle, the two teams started Hanoi meet with several chances for Vietnam, and the Vietnamese young men failed to turn them into goals in the first minutes. Thailand then regained the balance in the ball control, and the two teams had a tit-for-tat first half.

In the second half, Vietnam’s head coach Park Hang-seo sent in forward Nham Manh Dung (17), and the substitution proved effective. 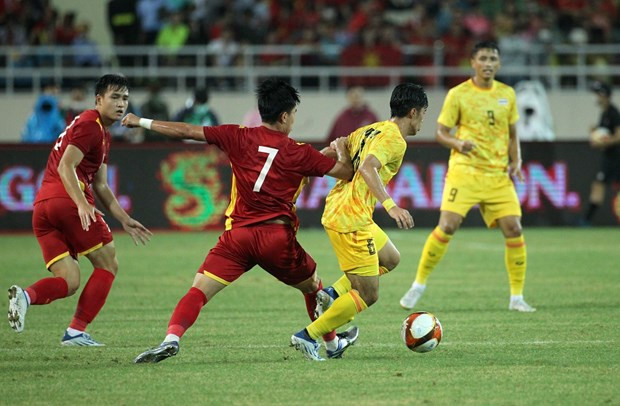 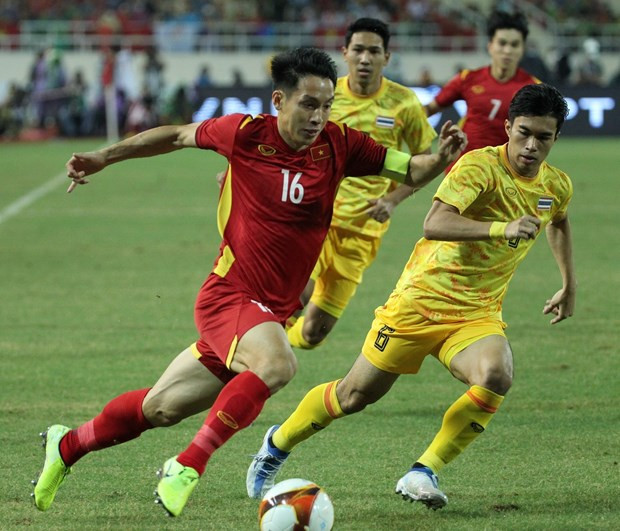 In the 82nd minute, Tuan Tai (12) created a good pass from the left, and Dung rose high to make an unstoppable header to the far high corner of the net of Thailand to score the only goal of the match, much to the excitement of the nearly 30,000 spectators who packed the My Dinh National Stadium to its full capacity.

Before the match, Vietnam were the reigning champions of U-23 men’s football in Southeast Asia after the SEA Games 30 held in 2019 in the Philippines.
PM congratulates Vietnam's U23 football team

Prime Minister Pham Minh Chinh on May 22 evening sent his congratulations to the men’s U23 football team and coach Park Hang-seo on their championship at the 31st Southeast Asian Games (SEA Games 31) hosted by Vietnam.

In his letter, the leader recalled great moments in the final match when the team successfully defended the title at the regional sporting event after defeating their Thai rivals.

He expressed his delight and appreciation for efforts, bravery, resilience, and discipline of the team, saying that it is the victory of the spirit of unity of Vietnam.

The team’s victory, along with the champion of the women’s football team and achievements of athletes in other sports at SEA Games 31, has affirmed the position of Vietnamese football in particular, and Vietnamese sports in general in the region, gradually reaching out to the world.

The Party and State will pay more attention to, and hopes that organisations, individuals and business communities continue to support the national sports, the leader said.

He suggested the Central Emulation and Rewards Council, the Ministry of Culture, Sports and Tourism, and relevant ministries to promptly propose appropriate forms of reward to players and coaches of the football teams, and excellent players and teams in other sports.

Both the Vietnamese men and women's football teams were given big bonuses for winning golds at SEA Games 31.

The Vietnam Football Federation (VFF) decided to award VND2 billion, equal to US$86,000, to the Vietnamese women's team following their 1-0 win over Thailand in the final match on May 21.

Most notably, FE Credit Company also decided to award a sum of VND3 billion to the team.

As a result, the total reward for the Vietnamese women's football team has reached VND7.6 billion, equivalent to US$328,000.

Meanwhile, after beating Thailand 1-0 in the final match on May 22, the Vietnamese men’s football team were immediately given VND2 billion by the VFF.

The U23 squad previously received VND1 billion from the VFF following their victory over Malaysia in the semifinals.

The rewards for the men’s team have so far added up to over VND3 billion, with the number expected to continue rising over the coming days.

Along with these bonuses, Vietravel Airlines decided to give each member of both men’ and women’s teams a pair of flight tickets to the Republic of Korea, with a total value of more than VND2 billion, along with its Platinum Membership Card.