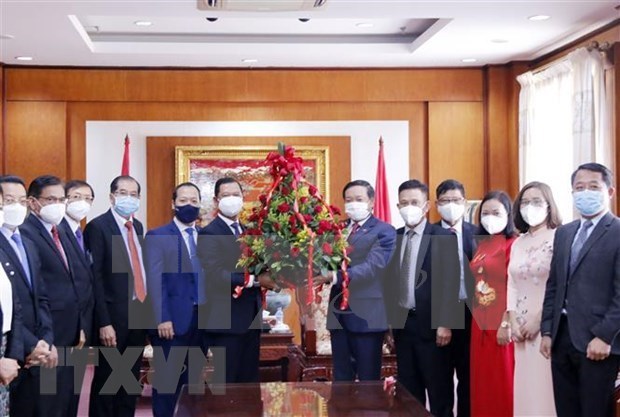 In the interview, Ambassador Hung highlighted Vietnam’s achievements in national construction and defence over the past 76 years under the leadership of the Communist Party of Vietnam as well as positive contributions to maintaining peace, stability, cooperation and development in the region and the world.

From a colonial country, Vietnam has become a developing country with a population of nearly 100 million and GDP growth of about 7 percent per year, defence and security ensured, stable socio-political situation, he said, adding the country's position has been rising in the international arena.

The diplomat underscored that despite complicated and unprecedented developments recently, especially those brought by COVID-19, the Party, State and people of Vietnam have shown strong mettle, creativity to overcome challenges, optimising opportunities and flexibly adapting to the new situation with comprehensive solutions, thus gaining important achievements in controlling the pandemic and boosting economic development.

Vietnam has so far set up ties with more than 500 international organisations and diplomatic relations with 189 out of 193 members of the United Nations, said the ambassador, adding that Vietnam has also established ties with 30 strategic and comprehensive partners.

Ambassador Hung affirmed that in the special occasion, Vietnamese people are commemorating great contributions of President Ho Chi Minh, President Kaysone Phomvihane and President Souphanouvong who laid firm foundation for the Vietnam-Laos ties. Throughout ups and downs of the history, the relationship between the two countries has overcome all challenges and thrived, becoming a great, exemplary, loyal and rare friendship in the world.

General Secretary of the Lao People’s Revolutionary Party and President of Laos Thongloun Sisoulith still visited Vietnam in June, while President Nguyen Xuan Phuc also paid a visit to Laos in early August. The two historical visits have proved the great friendship, special solidarity between the two nations that cannot be hindered by any hardship, he stated, stressing that despite any difficult situation, the two nations still give each other warm embrace of brotherhood and comradeship as well as encouragement and support, strengthening collaboration and reinforcing their trust.

Hung said 2022 will be the "Year of Solidarity and Friendship between Vietnam and Laos", during which various activities will be held to mark the 60th anniversary of bilateral diplomatic ties and 45 years of the signing of the Vietnam-Laos Treaty of Friendship and Amity. This will be a chance for people of both sides, especially young people, to work together to reinforce and accelerate bilateral ties to a new height in all fields, he added.

Vietnam’s remarkable achievements were due to extraordinary levels of cooperation and unity.