Vietnam plans to equitize some first class ports including Hai Phong, Da Nang, Quang Ninh, Saigon and Quy Nhon, a part of the program to call for private investment into the infrastructure development.

VietNamNet Bridge – Vietnam plans to equitize some first class ports including Hai Phong, Da Nang, Quang Ninh, Saigon and Quy Nhon, a part of the program to call for private investment into the infrastructure development. 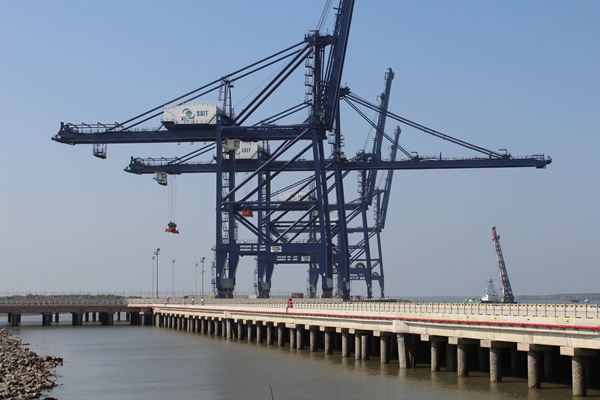 A series of ports to be equitized

In the latest news, Le Cong Minh, General Director of the Saigon Port, said on Saigon Tiep Thi that if the proposals of the ports are approved, he can be sure that the relocation of the port would be completed by the end of 2014.

The Vietnam National Shipping Lines (Vinalines) has reportedly decided that the Quy Nhon port would be the first unit of the corporation to go equitized. The procedures are hoped to be completed prior to June 30, 2013, which means that the port would operate under the mode of a joint stock company from July, in which Vinalines would still hold 75 percent of the chartered capital.

The equitization also aims to improve the efficiency of the seaports, assisting the process of restructuring the maritime industry, help ease the difficulties being faced by the shipping lines. The changes of the management mechanism are believed to help improve the business performance.

As planned, some 10 first class ports and the units belonging to Vinalines would be put into equitization.

Though the government has shown its determination to speed up the equitization process, experts still have doubts that the plan can be fulfilled soon.

Thoi bao Kinh te Saigon has quoted Nguyen Ngoc Toi, Secretary of the Board of Members of the Saigon Port as saying that it would be very difficult to transfer a part of capital when going equitized.

Meanwhile, the port’s management board has been busy with the relocation. The most important thing they need to do now is to seek capital to speed up the relocation.

Minh said that he has proposed the government to act as the guarantee for its borrowings, or to instruct the Vietnam Development Bank to lend to the port at the preferential interest rates.

Minh has also proposed the Ministry of Finance to allow the Saigon port to suspend the payment of the ODA (official development assistance) loan’s interests for 3 years. Saigon Port now has to pay $1,086,750 every year for the loan, which includes $942,950 in principal and $143,800 in interests.

It’s difficult to call for investment into port development

According to Dr. Nguyen Huy Hoang from the Transport Strategy and Development Institute, by the end of 2012, the ports in Vietnam had had the total capacity of $294.5 million tons per annum.

It is expected that Vietnam would need some VND360-440 trillion, or $18-22 billion to develop its port development.

However, Hoang said it’s very difficult to call for private investment into big ports such as Van Phong or Lach Huyen, though these have been cited as the most important projects in the port development program.