Vietnam is No 1 destination for Japanese investors

Of 81 businesses receiving support from the Japanese government, 37 have decided to invest in Vietnam, while 19 have chosen Thailand. 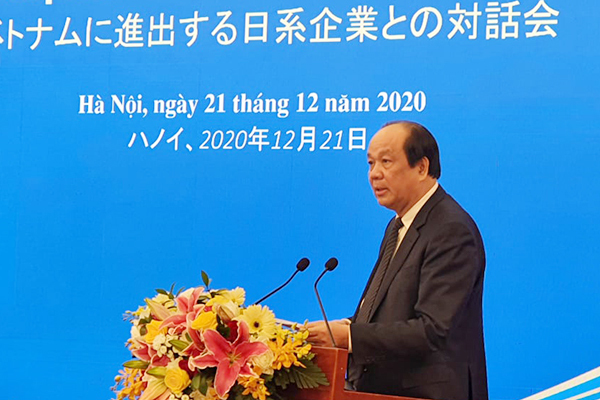 Speaking at a conference with Japanese enterprises in Vietnam on December 21, Minister and Chair of the Government Office Mai Tien Dung said Vietnam has resumed economic activities in a new normal status and that FDI continues to flow into Vietnam.

He reported that the government has instructed ministries, branches and local authorities to implement solutions to recover the economy.

Vietnam estimates a GDP growth rate of 2.6-3 percent this year, becoming one of a few economies in Asia Pacific and the only economy in Southeast Asia maintaining a positive economic growth rate. It is one of the 16 most successful emerging economies amid the pandemic.

Takio said the Japanese government is gathering strength to recover its economy in the post-Covid-19 period with a bailout of $2.3 billion.

Of 81 enterprises receiving support from the Japanese government, Vietnam is the biggest choice for Japanese investors with 37 businesses choosing Vietnam as the destination.

Thailand is the second favorite destination, chosen by 19 enterprises. As many as 55 Japanese enterprises have decided to set up head offices in Vietnam.

The figures, according to the ambassador, shows the high expectations that Japanese enterprises have put on Vietnam and their confidence in Vietnam’s development outlook in the time to come.

However, Japanese enterprises have also complained about the difficulties they have met in Vietnam.

As a result, the company may have to pay additional tax of up to $50 million for the next 10 years. Meanwhile, according to the investment license, the enterprise can enjoy preferential tax rate of 10 percent for 15 years, tax exemption for four years and 50 percent tax reduction in the next five years.

Other Japanese enterprises complained that the licensing procedures are complicated, which consumes time and money of enterprises.

Some enterprises complained about the strict requirements on environmental impact assessment (EIA) reports and problems in entry/exist procedures for specialists and investors.

In the case of Hoya Vietnam, Duong Duc Huy from the General Department of Taxation (GDT) explained that the products of the enterprise are magnetic discs, which do not belong to ' computer manufacturing, so they are not subject to a preferential CIT.

Hundreds of million of dollars pouring in from Japanese investors

Many Japanese groups are investing in Vietnamese enterprises instead of setting up their production and business facilities in Vietnam.