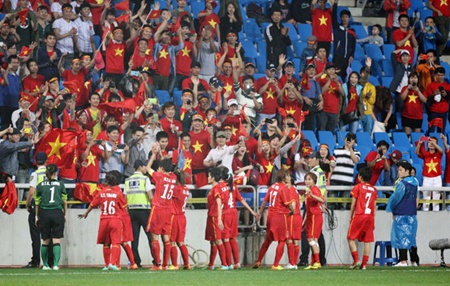 All three goals were scored in the second half after a goalless first half. Midfielder Kwon Hahnul opened the scoring with a long-distance shot from outside the penalty box after 55 minutes.

Jung Seolbin doubled the advantage with a close-range tap-in following Vietnamese goalkeeper Dang Thi Kieu Trinh's failure to get a grip on the ball before midfielder Park Heeyoung sealed the match with another close-range finish given away by another mistake from Trinh.

Despite the huge gap seen after losses in the semi-finals and the bronze-medal match, the 17th Asian Games in South Korea was still a landmark for the country given that this was the first time Viet Nam had a football team reaching the last stage at a continental level.

For South Koreans, the bronze medal may bring some degree of consolation to fans but the team must feel some disappointment at failing to go to the final match and claim their first gold medal on home soil.

North Korea and Japan, however, completely deserve to be finalists because of their capacity and aspirations.

Trinh was the centre of attention in the semi-final match following her brilliant performance. She did equally well in the first half against the hosts, making some crucial saves to keep the first half goalless, with Viet Nam contained to their own half throughout.

Viet Nam had only one shot at the goal in the first 45 minutes when defender Nguyen Thi Tuyet Dung dispossessed Jeon Gaeul nearly to the six-yard box and aimed her shot to the high corner of the net, but keeper Jun Minkyng was alert and diverted the ball into a corner.

Trinh's weakness in handling long-distance shots, which cost Viet Nam the first goal in the semi-final match against Japan, was exposed again in the second half yesterday, which culminated in giving away two goals to the host team.

The increasingly frustrated team found it hard to break the Vietnamese side, but Hahnul broke the deadlock when she collected a pass from her teammates 20m from the goal and moved the ball by one touch before firing a low shot from 18m out. The ball flew so quickly to the far corner of the net that Trinh, despite plunging down quickly, failed to stop it.

While Trinh should not be blamed for the opening goal, the second goal just two minutes later clearly stemmed from her fault as she failed to take a grip on a shot from the edge of the penalty area and Jung was on hand to rattle the roof of the net.

The third goal for the home team happened in similar style. It began with the experienced Vietnamese keeper letting the ball slip out of her hand following a long cross into the goalmouth by the South Koreans. Then Park pounced in when the ball fell to her part.

Viet Nam were able to venture forwards later in the match when the host team slowed their game but a lack of power, the main factor preventing Vietnamese football players from competing at the highest level, was once again visible.

In other news, North Korea upset defending champions Japan 3-1 to win Asian Games gold in the women's football yesterday, avenging their loss in the final four years ago.