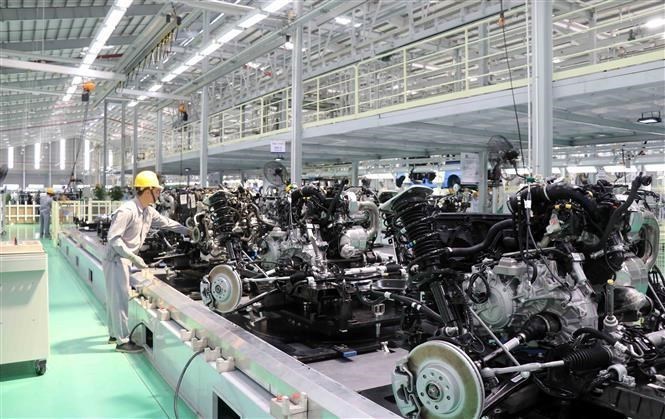 An August report from the Ministry of Planning and Investment (MPI) about the list of machines, equipment and spare parts, specialized transport vehicles, materials and unfinished products made domestically, showed that 287 car parts can be made in Vietnam. These include 269 car parts for less-than-9-seat cars and 18 for other types of vehicles.

The car parts are mostly simple products, which need many workers to be made. The list released by MPI doesn’t include high-technology products, such as acceleration sensor, auto body system equipment, and air conditioning.

After 30 years of development, from August 1991, when the first automobile joint venture (VMC) was established, the automobile industry is still in the very early stage of development with only simple, low added value car parts made.

In the supply chain, there are only 18 first-class vendors and 58 second- and third-class vendors. Some vendors supply both motorbike and car parts. The car parts made in Vietnam have production costs 2-3 times higher than in Thailand and Indonesia.

Analysts pointed out that Vietnam’s automobile industry cannot develop as expected because of the lack of reasonable policies. In the last decades, the policies just encouraged assembling, not manufacturing.

One automobile enterprise just needs to install an assembling line with the capacity of 10,000 products per annum for the four final stages of manufacturing – yielding, painting, assembling and testing. And then import all the car parts needed to assemble cars for sale to make big profits. As a result, the domestic production of car parts has no opportunity to develop.

Experts believe that the small scale of the automobile market is the most important reason behind the underdevelopment of the automobile industry. The 10 OEMs have total designed capacity of 500,000 products a year, while real output is just half.

The small scale of the domestic market is blamed on sky high taxes and fees which push production costs up.

The 2019 population and housing census conducted by the General Statistics Office (GSO) found that only 5.7 percent of households have private cars.

According to enterprises, the low output makes investors reluctant to invest in supporting industries. To make front bumper, rear bumper and Taplo panel for one car model, investors need to spend $12 million, and they can expect investment capital recovery after five years.

It’s estimated that investors need to obtain output of 60,000 products a year and turnover of $3.8 million to be able to recover the investment capital. Meanwhile, in Vietnam, the capacity of Toyota Vios, the one with highest output, is just 30,000 products per annum.

Car part production is listed among the industries that receive investment incentives. However, the incentives are just the same as other industries, which are not that attractive.

Le Duong Quang, Chair of VASI (Vietnam Association for Supporting Industries), said the Government in the last 30 years has been consistently developing the automobile industry, but the policies are inconsistent with the strategy.

The weakness of Vietnam in policies is the lack of long-term vision and the weak capability of anticipating events in the future. The policies are inconsistent, unpredictable, unsystematic and unclear.