Vietnam and Oman will continue to maintain the comprehensive development of various fields, including diplomacy, investment, trade, and tourism, through the annual meetings of the Vietnam-Oman Intergovernmental Cooperation Committee, said Oman’s Ambassador to Vietnam Saleh Mohamed Ahmed Al Suqri. 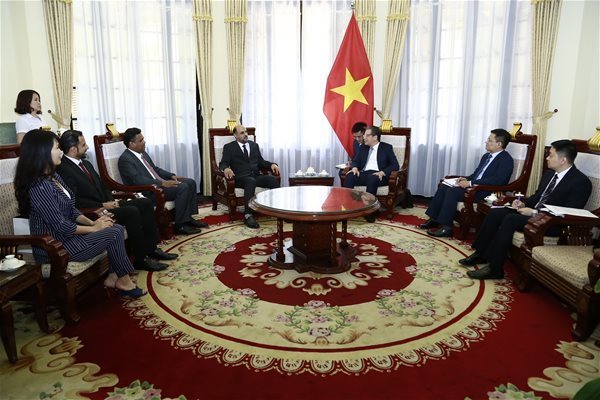 On the occasion of the 50th anniversary of the National Day of Oman on November 18, the ambassador of Oman said that since the bilateral relation was established in 1992, the two countries had made a number of remarkable achievements in trade.

The two countries are negotiating and finalizing some agreements to further promote bilateral ties.

With the traditional friendship and long-term cooperation, Vietnam and Oman have been potential strategic trade partners of each other. Also, the two countries always support each other to maintain their positions in Southeast Asia and the Middle East, as well as in the global market, said Saleh Mohamed Ahmed al Suqri.

Earlier in March 2018, Minister of Industry and Trade Tran Tuan Anh and Oman’s Minister of Commerce and Industry Ali bin Masoud bin Ali al Sunaidy signed a cooperation agreement between the two countries. Since the signing, many trade and investment projects have been initiated, raising total bilateral import and export turnover over the past few years.

Besides, after more than 10 years of establishment, the Vietnam-Oman Investment (VOI), a joint venture between the Oman Investment Authority and the State Capital Investment Corporation of Vietnam, invested some US$300 million in Vietnam, focusing on some sectors such as hi-tech agriculture, infrastructure, water treatment, renewable energy, pharmaceutical and healthcare, and education.