The 4th Vietnam Economic Forum has affirmed the correct and effective policy of the Party and State on pursuing Doi Moi, building an independent, self-reliant economy in combination with proactive and active international integration. 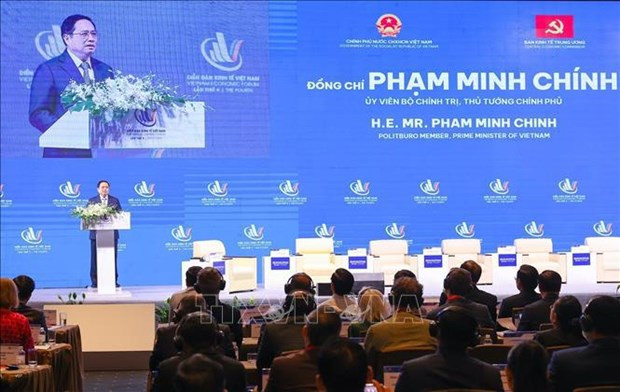 The effective implementation of this policy during more than 35 years of Doi Moi has contributed to producing historical achievements, the Government leader told the high-level session at the forum, adding that in the current situation, the building of an independent, self-reliant economy in combination with proactive and active international integration is an objective inevitability.

However, Vietnam will not sacrifice social justice and security and the environment for economic growth, the PM said.

Therefore, Vietnam has defined that people is the centre, the subject, the target and the driving force of development. On key tasks and solutions, PM Chinh said the first thing is to create a peaceful environment, maintain national independence, sovereignty and territorial integrity, political stability, social order and safety, and stabilize the legal environment, thus creating the foundation and favourable conditions for building an independent, self-reliant economy in combination with extensive and in-depth international integration.

Another task is to continue fine-tuning institutions of the socialist-oriented market economy that suit Vietnam’s conditions and international commitments.

PM Chinh stressed that the building of an independent, self-reliant economy in combination with extensive and in-depth international integration has an especially important meaning for the country in the new period.

“Vietnam affirms our consistent policy of not choosing a closed economy, but instead staying steadfast to the direction of Doi Moi (renewal), building an independent, self-reliant economy in combination with proactive and active international integration,” he said, reiterating that Vietnam wants to be a good friend, a reliable partner and a responsible member of the international community, ready to join hands with the international community to address regional and global challenges for a peaceful, cooperative and prosperous world.

The 4th Vietnam Economic Forum was co-organised by the Party Central Committee’s Economic Commission, the Government and Ho Chi Minh City on June 5.
Besides the high-level session, three other thematic workshops were held the same day on the development of stable labour supply chains after the pandemic, the capital and real estate markets, and technology modernization, digital transformation and diversification of supply chains.

In opening the high-level session, head of the Party Central Committee’s Economic Commission Tran Tuan Anh said the Vietnamese economy has faced unprecedented difficulties over the past two years due to the COVID-19 pandemic. The economy grew at under 3 percent, the lowest rate for the past 30 years, millions of labourers lost their jobs, thousands of enterprises had to stop operation, the capital and real estate markets saw abnormal fluctuations and there is a risk of rising bad debts in the banking system.

He said the country has managed to control the pandemic, quickly restored production and business activities, and supported people and businesses affected by the pandemic.

However, the pandemic’s impact and the new developments in the international situation, particularly the Russia-Ukraine conflict, have required Vietnam to act more quickly and stronger to build an independent, self-reliant economy in combination with extensive and effective integration, he said.

Delegates to the high-level session discussed and shared views on the contents of an independent and self-reliant economy of Vietnam in the new contexts and situation, focusing on the global economy and major trends in international economic cooperation, opportunities and challenges of Vietnam in the global economy, human resource training for digital technology to create breakthroughs in science-technology, and national risk management in the new situation.

They also made policy recommendations on consolidating the Vietnamese economy’s internal strength, enhancing its competitiveness and resilience against outside shocks, and handling the relationship between building an independent, self-reliant economy and international integration./.
Source: VNA