Since obtaining the membership 24 years ago, Vietnam has contributed to building up a strong and united ASEAN.

It can be said that the role of Vietnam in the Association of Southeast Asian Nations (ASEAN) has been increasing since it joined the bloc in July 1995, both local and international media have reported.

As an ASEAN member, Vietnam has worked hard to secure peace and reconciliation among Southeast Asian nations, which were once deeply divided by war, according to Sadhavi Chauhan, Observer Research Foundation.

Vietnam’s contributions to the bloc are typical in terms of politics and economy.

Vietnam was the first Indochinese country to join ASEAN, and its move helped end confrontation between the Indochinese bloc and ASEAN. Vietnam has also helped ASEAN partner with non-regional players including China, Russia, India and the EU.

Vietnam also led efforts within ASEAN to ensure regional security. Soon after becoming a member, Vietnam signed the Treaty on the Southeast Asian Nuclear-Weapon-Free Zone and was one of the founding members of the ASEAN Regional Forum.

But the most proactive steps by Hanoi towards regional stability have revolved around disputes in the South China Sea. A direct claimant in the dispute, Vietnam, along with the Philippines, has made constant efforts to put the South China Sea on ASEAN’s agenda, ensuring conflict is dealt with in a constructive way.

Hanoi calls for the settlement of disputes by peaceful means on the basis of international law and the 1982 United Nations Convention on the Law of the Sea (UNCLOS) including through regulations on respecting exclusive economic zones and the continental shelf of coastal countries.

Vietnam is running to prepare for the ASEAN Chairmanship in 2020. With the theme for ASEAN agenda 2020 “Cohesive and Responsive ASEAN”, Hanoi hopes to maintain the bloc’s centrality, according to Thai veteran journalist Kavi Chongkittavorn.

Along with the ASEAN chairmanship, next year Vietnam will also assume the role of a non-permanent rotating member of the United Nations Security Council from 2020-2021 -- its second time after a first stint in 2008-2009.

Trade revenues between Vietnam and ASEAN rocketed US$56.3 billion in 2018 from US$5.9 billion in 1996, according to the Vietnamese government’s portal.

Having joined the group against the backdrop of the Asian financial crisis, Vietnam immediately became involved in the organization’s economic activities.

In the Hanoi Plan of Action at the 6th ASEAN Summit held in Hanoi in 1998, Vietnam had made ideas and proposals to narrow the development gap in the region, highlighting specific solutions to the region’s vulnerable economic conditions, said Sadhavi Chauhan.

Besides making external efforts toward establishing an ASEAN Economic Community by 2015, Vietnam has also undertaken domestic changes to integrate itself with the group. The country has gradually restructured its administrative apparatus to suit a market economy.

A year after joining ASEAN it reorganized its bureaucracy by creating a National ASEAN Committee which is led by a deputy prime minister. This body is responsible for coordinating all the institutions that interact with ASEAN or ASEAN-affiliated bodies. It also established an ASEAN Department in its Ministry of Foreign Affairs.

Economically speaking, Vietnam is full of optimism. As a beneficiary of the US-China trade war, the country is using this opportunity to pursue further reforms to ensure the new shifts in global value chains will include Vietnam.

Vietnam’s GNP per capita is around US$2,700 currently from roughly US$100 in 1986. The figure is projected to rise further in the coming years.

At present, Vietnam is a socialist-oriented market economy that has the world’s largest network of free trade agreements with 17 in total (compared to six in Thailand). The latest one was with the European Union, signed in Hanoi in June this year.

As a result, foreign investors are pouring money into Vietnam to take advantage of the membership of the Comprehensive and Progressive Agreement for Trans-Pacific Partnership (CPTPP) and other pacts. 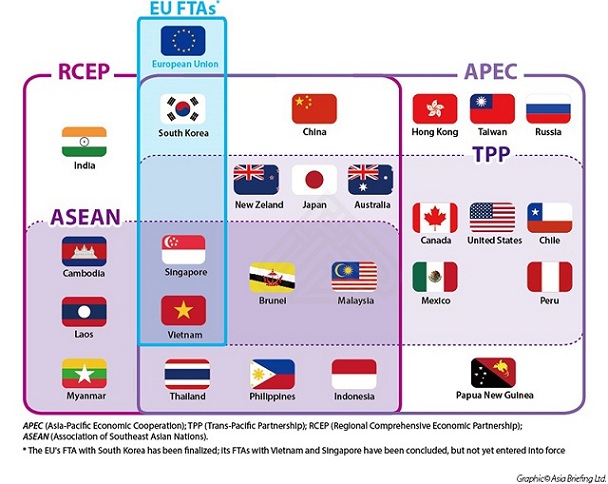 According to the latest update from the Asian Development Bank, amid the unpredictable US-China war, Vietnam's exports rose significantly during the first half of this year and its exports to the US increased by 33%.

Among foreign investors, South Korea, Japan and Singapore are the largest investors. As of October 2019, Vietnam has attracted more than US$358 billion in foreign direct investment after 30 years of opening up.

After its admission in 1995, Vietnam has risen within the ranks of ASEAN and now has become one of the most dynamic forces in the region, especially in economic integration and development, Kavi Chongkittavorn told the Bangkok Post. Hanoitimes

Vietnam to take over ASEAN Chairmanship in November

As Vietnam will take over the ASEAN Chairmanship from Thailand in early November 2019, Deputy PM Pham Bình Minh asked the National ASEAN 2020 Committee and relevant agenciesto do their best to complete preparations for the event.

The 15th ASEAN Ministerial Meeting on the Environment (AMME 15) and related meetings concluded in Siem Reap, Cambodia, on October 9 and released a joint statement.