Vice President of the Diplomatic Academy of Vietnam Nguyen Hung Son has presented the “An Nam dai quoc hoa do” (Map of the Great Country of An Nam) to the House of European History in Brussels, Belgium. 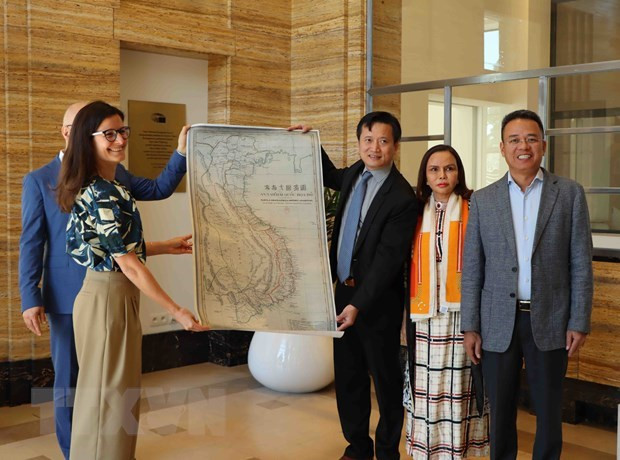 The special map, which is 84cm long and 45cm wide, was drawn by Jean Louis Taberd of France and published in India's Serampore in 1838. It depicts the archipelago of “Paracel seu Cat Vang” - Hoang Sa islands within Vietnam’s waters territory.

The “Paracel seu Cat Vang” showed in the map affirmed that the archipelago is Cat Vang, also called Hoang Sa by then Vietnamese. 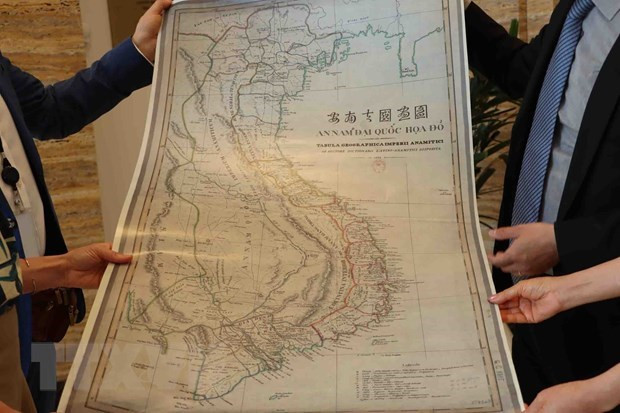 Speaking to the Vietnam News Agency, Son, who is also Director-General of the East Sea Institute, said that the presenting of the map to the House of European History is an idea of the Vietnamese Embassy in Brussels, showing the close relations between Vietnam and Belgium in all fields of politics, culture and history.

It also reflects Vietnam’s wish to help European friends get better understanding of Vietnamese history and give them an deeper insight into the history of the East Sea and the current situation of the waters.

Simina Badica, a Curator at the House of European History, said that the museum is keeping and exhibiting items from more than 200 countries.

She expressed her delight to receive the map from Vietnam, which will help researchers and visitors understand more about the geographical history of Vietnam. This is the first time that the house has received an item from Vietnam, she noted, showing her hope that cooperation and exchange between the two sides in history and culture will continue to expand.

During his stay in Belgium and Europe, on June 17, Son also received 13 sets of documents on Vietnamese border and territory from international law professor Jean Salmon, including a valuable document set on Vietnam’s Hoang Sa archipelago written in 1960.

Professor Jean Salmon, 91, once worked as a lawyer and lecturer of international law at the Free University of Brussels, and an advisor of the Vietnam National Border Committee on border-related issues and diplomatic rules./.
Source: VNA