Prior to the 13th National Congress of the Communist Party of Vietnam, hostile forces and opportunists have made up stories distorting issues concerning Vietnamese territories in order to sabotage the Party and State of Vietnam and disturb the peaceful life of the Vietnamese people. 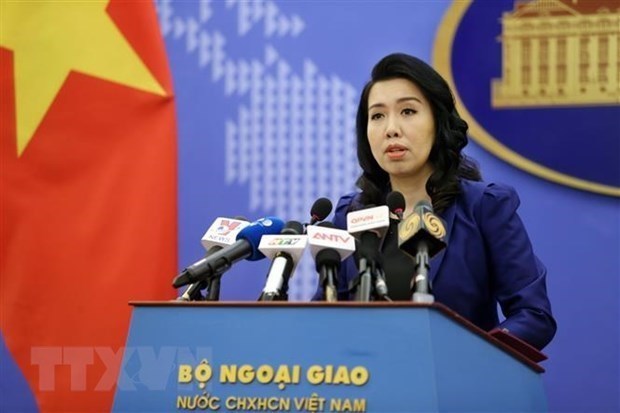 Many web pages and forums on social networks frequented by political subversives have spread the message that the Vietnamese Party and State pay more attention to organizing Party Congresses than defending national maritime sovereignty.

There are also stories distorting views, guidelines and policies on safeguarding national sovereignty using provocative conspiracy theory to incite people and undermine their trust in the leadership of the Party and State. More dangerously, many of these agitators abuse the territorial sovereignty issue, particularly maritime sovereignty, to provoke people to take to the streets to demonstrate their patriotism causing social instability.

On June 23, 1994, the Vietnamese National Assembly adopted a resolution approving the 1982 UN Convention on the Law of the Sea (UNCLOS) which affirms Vietnam’s sovereignty over internal waters, territorial waters, and sovereign rights and jurisdiction over the adjacent areas of territorial waters, exclusive economic zone and continental shelf of Vietnam and asking countries to respect Vietnam’s rights. The resolution affirms Vietnam’s sovereignty over the Hoang Sa (Paracel) and Truong Sa (Spratly) archipelagos and its intention to settle disputes concerning territorial sovereignty and East Sea related disputes through peaceful negotiations on a basis of equality, understanding and mutual respect, and respect for international law, particularly the 1982 UNCLOS.

Complying with the UN Convention, Vietnam adopted the Law on the Vietnamese Sea in 2012 to consolidate the planning, use, exploration, and exploitation of sea resources and management of Vietnamese waters, continental shelf, and islands as well as the settlement of disputes at sea between Vietnam and neighboring countries. The Vietnam National Assembly also ratified the 2003 Law on National Border, the 2015 Maritime Law, and the 2015 Law on Natural Resources, Marine Environment and Islands.

Defending national maritime sovereignty is a sacred and a long-term challenge. Vietnam has resolutely, consistently, and patiently pursued peaceful means in line with international law to defend its sovereignty, sovereign right and jurisdiction on the ground and through diplomatic channels at different levels.

All is clearly reflected in the Resolution of the 12th National Party Congress and proven in the ways that Vietnam is addressing issues in the East Sea with respect for the rule of law. Vietnam intends to peacefully address disputes in line with international law and the 1982 UN Convention on the Law of the Sea, refrain from using or threatening to use force, fully and effectively implement the Declaration on the Conduct of Parties in the East Sea (DOC) and soon finalize the Code of Conduct in the East Sea (COC).

Vietnam’s consistent policy on territorial sovereignty has been repeatedly confirmed by leaders of the Party, State, and army. At a meeting with voters in Hanoi last October, Party General Secretary and President Nguyen Phu Trong pointed out the potential risks of security, complications, particularly border and territorial issues and called on the people to stay vigilant against extreme views about the East Sea issue. Mr. Trong affirmed Vietnam’s determination to maintain a peaceful, stable environment for development and resolutely and patiently defend national independence, sovereignty, unity, and territorial integrity and never make concessions on issues concerning these values sovereignty, independence, unification and territorial integrity.

At a ceremony to release the 2019 White Paper on Vietnam National Defense, Deputy Defense Minister Senior Lieutenant General Nguyen Chi Vinh said that Vietnam only uses force for self-defense when the country is invaded to safeguard national independence, sovereignty, unity, territorial integrity, national interests and stability of the regime. The White Paper on Vietnam National Defense reiterates Vietnam’s consistent policy of not using or threatening to use force in international relations and not participating in military alliances.

Valuable lessons learned from wars in the past have prompted countries, even those with strong military capability, to promote dialogue and international law as the model for resolving all territorial issues rather than conflict and confrontation. This is the basis of Vietnamese guidelines and policies that insist on defending national sovereignty and settling related issues through peaceful means.