Japanese investors, after years of working with different markets, have concluded that the real estate market in Vietnam appears to be most attractive in Southeast Asia.

Vietnam has become an appealing destination for its safe and stable business environment though prospective in regional peer like Indonesia or Cambodia remains bright, Director of Japan’s Global Link Cooperative Yoshinori Nakata told Vietnam News Agency on the sidelines of an investment promotion workshop in Osaka, Japan on April 9. 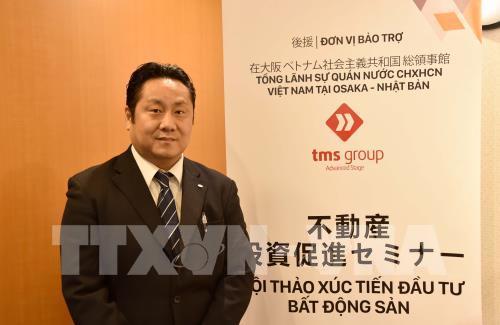 Real estate has turned to be the most-chosen investment channel in Vietnam as foreign investors see their significant returns on the money they will invest, Nakata said.
Echoing Nakata, Kako Sasai, head of the business information division of the Japan External Trade Organization (JETRO), said foreign direct investment (FDI) in Vietnam’s real estate market could increase in the time ahead.
Showing evidence for the statement, the expert said that the number of Japanese companies investing in Vietnam’s real estate sector has been on the rise, especially between 2016 and 2018.
Growing demand for offices and houses has been the main reason, she said.
It is obvious that Vietnam has witnessed a rapid urbanization rate over the past years, ranking it the leading nation in Southeast Asia for the fastest urbanization rate, the Kinh Te & Do Thi newspaper reported.
As of May 2018, Vietnam was home to 813 urban areas, including economic zones, and industrial parks.
Most of Japanese investors in Vietnam evaluated that the country has lots of potential and brings stable profits, Kako Sasai emphasized.
According to the JETRO’s latest survey, Japan’s foreign direct investment (FDI) and the number of Japanese businesses in Vietnam have been risen. As many as 70% of Japanese companies plan to expand operations in Vietnam, while 88% expect their revenues in the market will increase in the future.
Meanwhile, other Japanese experts attributed the attractive real estate market to the growing number of people at working ages. It would be the consumers in the near future, they said.
Toru Tomita, director general at the Osaka-based O.M.NET cooperative business association, described Vietnam as a young nation with abundant labor supplies. In the future, more Japanese businesses will come to invest in Vietnam, he said.
In terms of policies, Vietnamese Consul General in Osaka Vu Tuan Hai affirmed that the Vietnamese government has relaxed its rule on foreign housing ownership and will create an open and equal business environment for Japanese investors.
With such a spirit, the Vietnamese government has been focusing on attracting more foreign investors and overseas Vietnamese to invest in the country beyond the field of real estate.
Figures speak
Foreign investors were reported to pour roughly US$6.6 billion into Vietnam’s real estate sector in 2018, doubling year-on-year, statistics by the Ministry of Planning and Investment showed.
The figure ranked real estate the second most invested sector, only behind manufacturing in Vietnam.
According to the Ho Chi Minh City Real Estate Association (HoREA), FDI to real estate topped foreign investors’ investment portfolios in Hanoi and ranked second in the southern metropolis of Ho Chi Minh City.
Head of HoREA Le Hoang Chau said that Japanese and South Koreans top foreign investors in Vietnam's real estate sector.
More importantly, the foreign developers bring premier segment and services with luxury architecture and lifestyle, drawing a large number of foreign homebuyers, Chau said, adding that the operations of foreign investors also boost the market transparency.
The development of real estate market has lifted up the luxury office segment in big cities, mostly Ho Chi Minh City, with the occupancy rate of 96% for Grade A and more than 90% for Grade B.
Vietnam’s real estate market would continue its upward trend in 2019 thanks to rising FDI, the prospects of the signing of the EU-Vietnam Free Trade Agreement (EVFTA), and the US-China trade conflicts, Chau noted.
Hanoitimes