VietNamNet Bridge - Vietnam has taken a consistent policy: denying the possibility of creating and preventing the spread of weapons of mass destruction - nuclear weapons - in the world.

VietNamNet Bridge - Vietnam has taken a consistent policy: denying the possibility of creating and preventing the spread of weapons of mass destruction - nuclear weapons - in the world. 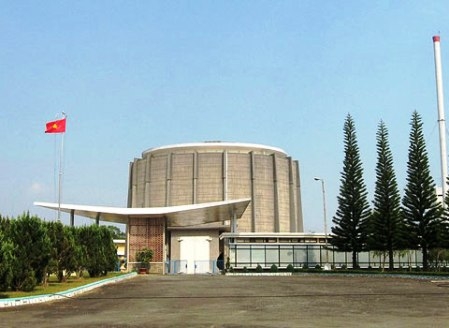 The scene outside the nuclear reactor in Da Lat.

Regarding of weapons of mass destruction, the first types that need to be mentioned is nuclear bomb (A-bomb) or hydrogen bomb (H-bomb).

A non-governmental organization internationally known called "The Nuclear Threat Initiative” ( NIT) has confirmed: "Vietnam does not own nuclear, biological or chemical weapons or the programs to develop such weapons and is a party to most of the non-proliferation treaty and related agreements...."

In fact, in June 1982, Vietnam joined the Treaty on Non-proliferation of Nuclear Weapons (NPT) and officially became a non-nuclear weapons nation. Under this Treaty, only the countries that conducted nuclear bomb tests from 1967 and before (including the U.S., Russia, Britain, France and China) are implicitly considered the ownership of such weapons. Other countries, when joining the NPT, will not be pursuing the manufacturing of nuclear weapons, but be entitled to receive the transfer, assistance of equipment, materials, technology, training ... to implement applications of atomic energy for peaceful purposes.

In 1996, Vietnam signed the Comprehensive Nuclear-Test-Ban Treaty (CTBT) and ratified the Treaty in 2006. VN also signed the agreement on comprehensive security guarantee with the International Atomic Energy Agency (IAEA) which took effect in 1990. In addition, Vietnam has become a member of the non-nuclear weapons in Southeast Asia Treaty (Treaty of Bangkok).

However, NTI also pointed out remaining issues, such as Vietnam is not a member of "the big export control regimes" or lacking "a central agency" to oversee strategic trade. But the backlog is not the fundamental and it may be just a matter of time or consideration of other factors that are completely unrelated to the core issue of nuclear weapons.

It is clear that, with the willing and voluntary binding with the aforementioned international commitments, Vietnam, since the 80s of the 20th century, has officially declared to make a break with the path of nuclear weapon development.

Not only making a declaration, Vietnam has taken action. According to the assessment of NTI, Vietnam does not have any program to develop nuclear weapons. They commented: "There is no publicly available evidence proving that Vietnam has been looking for a nuclear weapon."

Although, according to NTI, the declassification of preserved documents shows: "The United States considered the possibility of using nuclear weapons against North Vietnam in the last half of the Vietnam War (1954-1975 - writer's note). "In that circumstance, assuming that their "rival" at that time have "childish" intention or behavior is also understandable.

At present, Vietnam has expressed serious implementation of international commitments in specific actions: the serious treatment of fuel of the nuclear reactor in Da Lat.

The nuclear reactor in Da Lat is research reactor type, with temperature power of 500 Kilowatt or 0.5 Megawatt. There are 160 research reactors worldwide, including the highest number of 62 reactors in Russia, followed by the United States (54), Japan (18), France (15), Germany (14) and China (13). Many small or developing countries also have research reactors, such as Bangladesh, Algeria, Colombia, Ghana, Jamaica, Libya and Thailand.

The function of such type of research reactor like the one in Da Lat is mainly used to study nuclear physics and civilian applications such as the production of radioactive substances, analysis of geological samples, etc...

This reactor is recovered from the old reactor left by the United States after withdrawing and taking back all materials and fuels to the US in the summer of 1975. By 1983 the reactor was restored and re-launched with fuel rods from Russia.

In principle, the research reactors like the one in Da Lat can be used to produce two types of fuel: 239 Plutonium isotopes (Pu239) and Uranium 235 (U235), which are the "dynamite" of nuclear bomb. This doubt has been raised recently for a similar reactor at the Yongbyon Nuclear Center of North Korea.

But with the reactor in Da Lat, there is nothing to doubt about the seriousness of the international law of Vietnam.

First of all, regarding Pu239, since the Da Lat nuclear reactor has very little power, it can create less than one hundred grams of Pu239 per year so it will take a very long time (60 years) to have enough the minimum "explosive" (about 6 kg or 6,000 grams of Pu239) to manufacture one nuclear bomb. In fact, IAEA inspectors have periodically inspected the Da Lat reactor and they have not found any thing.

For U235, the reactor in Da Lat, from 1983 to 2007, used fuel containing high enriched uranium (HEU) with 36 percent concentration. With such a high enriched fuel, if the host country wants, it can further enrich to achieve 90 percent level to meet the standard for nuclear bomb.

Therefore, the reduction of the fuel rods to low enriched (LEU) with the concentration of below 20 percent has been recommended, not only in Da Lat but all other reactors in the world.

Vietnam is ready to accept this recommendation. The Vietnamese government has accepted an international project sponsored by the United Nations and bilateral agreements between Vietnam-U.S. and Russia-US. From 9/2007 to 10/2011, Vietnam completely made the transition of all fuel rods of the Da Lat reactor from the high enriched (HEU) to the low enriched (LEU) level. Both types of fuel rods are produced in Russia and all the HEU bars were transferred back to the place of production, Russia.

In addition, Vietnam has cooperated with the United States to increase protection against the loss of fuel rods in the reactor and kept in storage at the Da Lat reactor.

With the above actions, Vietnam has made a consistent policy: denying the possibility of creating and preventing the spread of weapons of mass destruction - nuclear weapons in the world.