VTR in Australia wants the Da Lat Import/Export Company to connect with the Long An province Industry and Trade Department to cillect 5 tons of red flesh dragon fruit. 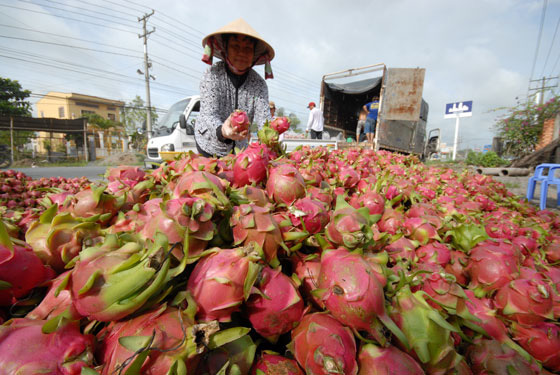 Dang Phuc Nguyen, secretary general of the Vietnam Vegetable and Fruit Association, praised the activities which have helped farmers boost sales during Covid-19.

Nguyen said if Vietnam can open many small markets, this will still increase consumption.

Australia, the US, EU and Japan have high demand for Vietnam’s fruit. However, they set high requirements on products and only accept fruit that meets GlobalGAP standards. Less than 5 percent of Vietnam’s total growing area has this certificate.

Nguyen Quoc Trinh, chair of the Long An provincial Dragon Fruit Association, admitted that exports to the Australian market remain modest, though Australia opened its market more than two years ago.

“Vietnam’s dragon fruit is sold at $20 per kilogram at supermarkets. If we can reduce the prices, the sales will be better,” he said.

Nguyen Thi Hong Thu, director of Chanh Thu Fruit Import/Export Company, confirmed that there are only several shipments of dragon fruit to Australia each year.

“Australia is a choosy market. To satisfy the requirements set by the import market, we have to collect fruit from the farmers with GlobalGAP,” she explained.

“While setting high requirements on product quality, Australian importers want reasonable prices. So we are not focusing on exploiting the market,” she said.

Chanh Thu is well known fruit import/export company in Vietnam. However, Thu said that Vietnamese businesses in this field remain fledgling and they can only exploit the small markets of Chinese and Vietnamese communities living in foreign countries. Because of limited resources, they cannot organize many activities overseas to advertise Vietnamese fruit.

The other reason behind the modest export volume is the short supply. “The amount of fruit the company can collect sometimes are not high enough to fulfill orders because the growing areas are fragmented and the product quality is uneven,” she said.