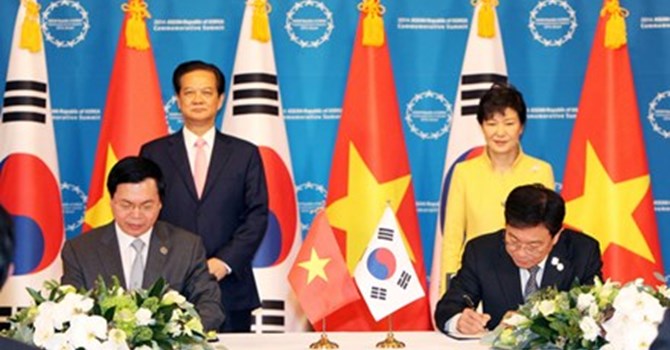 “We have take part in many FTA negotiations, but the negotiations with South Korea were the toughest. We never had to work so hard before,” said Dao Thu Huong from the International Cooperation Department of the Ministry of Finance.

“There were negotiations which lasted from 9 am until 5 am next day. We had only 15-20 minutes for a break and then continued our work. We worked all night during the final days,” Huong said.

“The South Korean partners burst into a loud cry after the negotiations finished, and they cried the next days as well,” she said.

It happened that just four hours before the two governments announced the end of the negotiations, the South Korean side changed its mind and wanted to withdraw some commitments.

“For many categories of products, Vietnam is the only country to which South Korea has opened its market doors,” Huong said.

South Korea, for example, is very cautious when talking about the opening of its shrimp market, especially to ASEAN countries.

It previously only agreed to exempt the import tax on 5,000 tons of shrimp products from all 10 ASEAN countries under the South Korea-ASEAN FTA.

Meanwhile, with the Vietnam-South Korea FTA (VKFTA), the tax exemption will be applied to 10,000 tons of shrimp imports from Vietnam every year. The figure will rise to 15,000 tons per annum from the sixth year of VKFTA.

Pham Khac Tuyen, a senior official of the Ministry of Industry and Trade’s Asia-Pacific Market, said that negotiators had to spend 3-4 days and nights just to talk about garlic and chili.

“Garlic, chili and ginger are very important input materials to make kimchi, the kind of food present in all meals of South Koreans,” he explained.

“We worked 22 hours a day and 3-4 days consecutively just on garlic and chili,” he said. “South Korean ministers called each other at midnight just to discuss garlic and chili.”

Farm produce are now put under strict protection of the South Korean government which taxes 300-400 percent on imports. However, in the VKFTA, the tax rate would be cut to zero percent in 10 years.

Nguyen Thi Thu Trang, director of WTO Center, an arm of the Vietnam Chamber of Commerce and Industry (VCCI), noted that FTAs had brought big opportunities to Vietnamese businesses, but to take full advantage of the opportunities, they will still have to depend on their capability.