The Vietnamese team, consisting of 19 players, headed to Jeju Island, Republic of Korea, on January 30 to make the last-minute preparations for their mission of hunting for a ticket to Tokyo 2020 this summer, with centre-back Chuong Thi Kieu being left at home to focus on injury recovery.

Group A initially comprised DPR Korea, the Republic of Korea, Myanmar and Vietnam, but now features only three teams following the withdrawal of DPR Korea.

Evaluating the remaining two opponents in the group, Chung said: “The RoK are always among the top teams in Asia, while Myanmar have made considerable progress in recent times. We highly appreciate these two teams. Vietnam are now in the process of rejuvenation, and we need such matches to improve the players’ qualifications.” 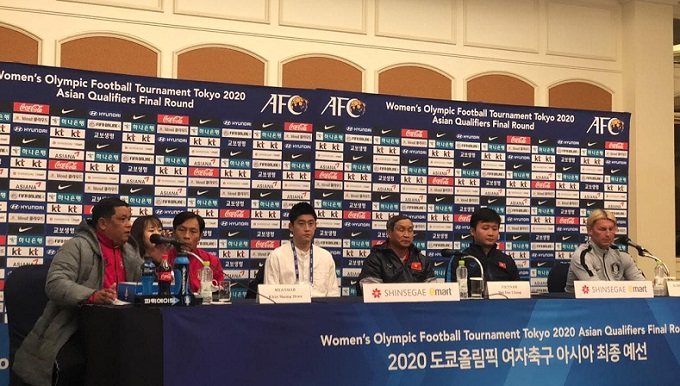 A general view of the press conference. (Photo: VFF)

The Group A matches will be hosted on Jeju Island from February 3 to 9, the fixtures of Group B, which gathers Australia, China, Chinese Taipei and Thailand, have been forced to move from China to Australia due to the outbreak and complicated developments of the acute respiratory infection caused by a new strain of coronavirus in China.

In round three of the Tokyo 2020 qualifiers, the teams will play in a round robin format (February 3-9) to decide the top two teams from each group to progress to the play-off tournament. The two best teams of the play-off tournament, which will be played on a home and away basis from March 6 to 11, will join hosts Japan as the three representatives of Asia at the 2020 Tokyo Olympic Games.

Vietnamese players in action during their training session in Jeju on February 1. (Photo: VFF)

With the withdrawal of DPR Korea, Vietnam will be off on matchday one today. Chung’s side will instead play their Group A opener against Myanmar on February 6 before taking on the RoK three days later.

To prepare for the opener, the Vietnamese team had two training sessions on Sunday. From today until February 5, Chung’s troops will maintain one training session per day. Nhan Dan