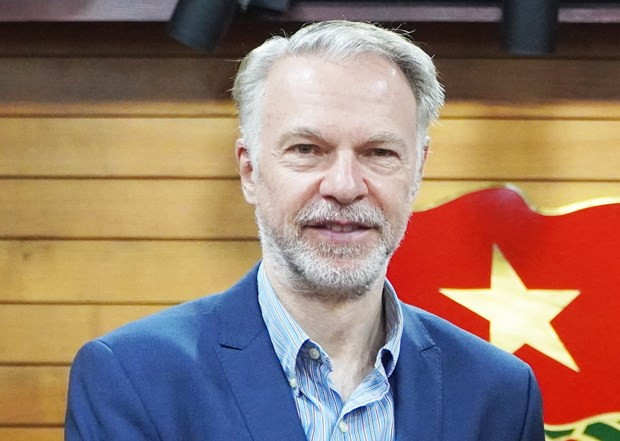 In an interview granted to the Vietnam News Agency on the occasion of the Lunar New Year (Tet) festival, Manhart presented his view on the Southeast Asian nation’s competitiveness for tourism, which he said lies in its rich and exceptional culture and nature.

The UNESCO Representative went on: “Vietnam is very successful in connecting tangible with its intangible heritage. An example and one of my favourite experiences is the Ao Dai Festival last April in Yen Tu. I was so lucky to participate in the festival and got to wear a traditional Vietnamese Ao Dai with the World Heritage logo printed on it. Ao Dai is a candidate for the Intangible Heritage List and Yen Tu is seeking to get the UNESCO recognition as a World Heritage Site.”

Two designs of Ao Dai on display at the Ao Dai festival at the Yen Tu relic site in Quang Ninh in April 2022. (Photo: uongbi.gov.vn)

“Another advantage is that the Vietnamese government is well aware of the value of its culture and heritage as a driver for economic and social development. It has made lots of efforts to promote culture-based tourism while preserving the cultural and natural sites,” said Manhart. He suggested Vietnam develop new innovative and sustainable tourism products that reflect its unique traditions and cultural practices. “In addition, it would be very useful to put local communities at the heart of tourism management: communities are a main attraction and should also be main beneficiaries and have a leading role in tourism management. This should lead to create favourable conditions for safeguarding intangible cultural heritage, as well as improving living and working conditions of the local inhabitants.”

He also highlighted the importance to create synergies between public and private initiatives and promote community participation, for better coordination.

“There should be more capacity building programmes to enhance quality of the tourism workforce: Develop community-centered tourism initiatives that actively engage communities with their local and traditional knowledge. It might also be useful to simplify tourist visa procedures and grant longer tourist visas than the presently one month,” he said. This would create incentive for foreign tourist to visit less known areas which thus could benefit from tourism income, and new job and business opportunities, he explained.

With regards to UNESCO inscription of the art of pottery-making of Cham people on its List of Intangible Cultural Heritage in Need of Urgent Safeguarding, he noted that the art is presently at risk due to the impact of urbanisation on the communities, a lack of raw materials, insufficient adaptation to the market economy, and a lack of interest by the younger generation.

“It is positive that the pottery villages of the Cham people have already received protection by the Government and local authorities, which issued a number of decisions on the safeguarding and development of craft villages. The art is also inscribed on the List of National Intangible Cultural Heritage,” said Manhart.

He recommended Vietnam and other countries that house elements inscribed on the Representative List of the UNESCO Intangible Cultural Heritage of Humanity invest resources in their preservation, and such creating an enabling environment for communities to practice, develop and keep their intangible heritages alive.

UNESCO stands ready to continue providing technical support to preserve the intangible heritages in Vietnam, he stressed. Manhart pledged that UNESCO will continue its close collaboration with the Vietnamese central and local governments, the private sector, society organisations and local communities to promote education, science, culture, and communications for the country’s sustainable development.