Vietnam to face Japan in 2016 Asian U23 qualifying round

U23 Vietnam will face the U23 teams of Japan, Malaysia and Macau at the Group I qualifying round of the 2016 Asian U23 Football Championships.

U23 Vietnam will face the U23 teams of Japan, Malaysia and Macau at the Group I qualifying round of the 2016 Asian U23 Football Championships. 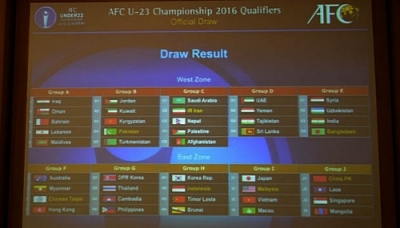 This was following the draw in Kuala Lumpur, Malaysia on December 4.

The tournament will see the completion of 40 qualifying teams, divided into 10 groups. The qualifying round is scheduled to take place in 10 different Asian countries from March 23-31, 2015.

The top teams from each group and five best second-place teams will enter the final round, to be held in Qatar in January, 2016.

The top three teams in the finals will represent the Asia region to compete in the 2016 Olympics in Brazil.

This is the second time the tournament is being held. U23 Vietnam faced the Republic of Korea, Myanmar, Malaysia, Taiwan (China) and Philippines at last year’s championships, and did not play in the final round.

According to the draw, the champion of last year’s tournament, Iraq, will compete in Group A with U23 Bahrain, Lebanon and Maldives.