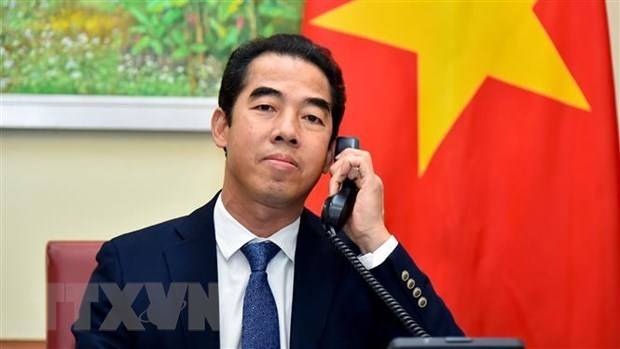 They shared pleasure at the positive and comprehensive growth of the Vietnam-UK relationship.

They noted that last year, the two sides issued a joint statement on the elevation of the bilateral strategic partnership to a higher level in the next decade, as well as signing the UK-Vietnam Free Trade Agreement. Both officials expressed their belief that the bilateral ties will further develop in the time to come.

Dung congratulated the UK on its important achievements in containing the COVID-19 pandemic, especially its leading the way in Europe and the world in deploying COVID-19 vaccinations.

The official expressed his hope that the UK will share experience in vaccinations with Vietnam, and create more favourable conditions for the country in the next rounds of vaccine supply.

He held that the two sides should resume the exchange of delegations soon and effectively implement key cooperation mechanisms, including the strategic dialogue on security-defence, thus creating new momentum for the bilateral strategic partnership in the areas of politics-diplomacy, trade, investment, development cooperation, security-defence, culture, education, health care, science-technology, and people-to-people exchanges.

For his part, Adams congratulated Vietnam on successfully performing its role as ASEAN Chair in 2020 and thanked Vietnam for its support to the UK in strengthening relations with the Association of Southeast Asian Nations (ASEAN), while lauding Vietnam’s role as a non-permanent member of the UN Security Council in the 2020-2021 tenure and its efforts in responding to climate change and switching to green energy for sustainable development.

He affirmed that the UK will continue cooperating with Vietnam in multilateral frameworks and promote the observance of international law, including the UN Convention on the Law of the Sea 1982 for peace and stability in the region and the world.

The two sides also discussed a number of international and regional issues of shared concern, and agreed to work closely together in a bid to ensure the success of the United Nations Climate Change Conference (COP26) which will be hosted by the UK in late 2021.