Vietnam has received thousands of foreign visitors from across the continents who chose Vietnam as their destination on the first day of 2015.

Vietnam has received thousands of foreign visitors from across the continents who chose Vietnam as their destination on the first day of 2015. 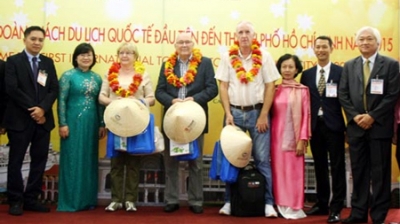 The passengers were presented with Vietnam’s traditional conical hats and were invited to enjoy calligraphy performances and traditional melodies right at the airport.

Meanwhile, Hoi An city in the central province of Quang Nam presented flowers to 68 Polish visitors who are on a tour with Vietnam’s 365 Travel Company.

Sapa town in the northern province of Lao Cai is expected to greet more than 30,000 visitors this New Year holiday, an increase of 10-12% over the past year.

The tourists are offered an opportunity to discover the traditional cultural identities of ethic groups living there, such as folk songs of Dao people and marriage customs of Mong people.

Vietnam among top 5 countries to visit in 2015

Malaysia’s independent newspaper, Malay Mail Online, has delivered its rankings and suggestions for travellers for the coming year and cites Vietnam as one of the top five destinations that stand out from the crowd.

The newspaper reported that Vietnam has declared 2015 its national year of tourism, meaning that there has never been a better time to visit.

Special events and shows for tourists will be held at the country’s monuments and cultural heritage sites, such as the imperial fortress of Thang Long.

Danang, a city located between Hanoi and Ho Chi Minh City, topped Tripadvisor’s list of the best destinations of 2015. With its Buddhist sanctuaries and beautiful beaches, the destination is winning over more and more members of the website’s travel community.

Rounding out the top five are Namibia, Panama and Nicaragua, Lithuania, and Mons, Belgium.

Vietnam has set the target of welcoming 8.5 million foreigners and 41 million domestic visitors this year, grossing more than US$12 billion from the tourism sector.

More Vietnamese people are opting for long vacations to European countries and the US this Tet Lunar New Year as they take advantage of the nine-day holiday and head abroad, travel companies report.

They get four day's off over the Western New Year and most are staying home, planning for a longer vacation over Tet.

Several travel agents report their customers are opting for longer tours to far destinations including Europe, the US or Japan this Tet instead of Singapore, Thailand, Malaysia or other familiar neighbouring countries.

A representative of BenThanh Tourist said that although Tet is still two-month away, the company's booking rate for Tet vacations was at 60 percent of capacity, with passenger numbers up 15 percent on a year earlier.

Hanoi Redtours has budgeted for 1,800 customers this Tet, including 1,200 outbound tourists, and its booking rate has reached 30 percent of capacity.

According to the director of Hanoi Redtours, Nguyen Cong Hoan, some near destinations like Thailand, Singapore, Malaysia, Hongkong, or Cambodia were less popular, with bookings down 50 percent, while places further afield, such as US, Australia, Europe, attracting more customers.

Viettravel Company said there had been a sharp increase of 30-40 percent in clients wanting to travel over the coming Tet. It expects 6,000-8,000 bookings, compared with 5,000 a year earlier.

Viettravel's director of marketing, Tran Thi Viet Huong, said there was more interest in tours to Japan and South Korea, while tours to Europe and the US were also more popular.

"Tour prices to the US has been slashed to VND 70 million from VND 100 million earlier," Long said. "The VND 80-90 million package to Europe now also costs only VND 60 million."

Some new destinations have also attracted many Vietnamese visitors, including Turkey. The head of the sales department at Gotadi online flight booking site, Nguyen Trung Son Hai, said a 10-day nine-night tour to Turkey, priced at VND 40 million, had attracted 50 out of 100 bookings.

Tan Son Nhat International Airport in HCM City welcomed its first foreign visitors of the year on January 1 with flowers and conical hats inscribed with the words ‘Happy New Year’.

City officials from the Department of Culture, Sports and Tourism along with representatives from travel agencies gathered at the International Terminal of the airport to welcome the visitors, mainly from the UK, who were on a Vietnam Airlines stopover flight on their way to Australia.

David from the UK said he was very surprised and enjoyed the warm welcome he received.

At the welcoming ceremony, airport officials revealed the city is expected to receive about 1,000 international tourists of 5 flights on the first day of the year.

Director of the municipal Department of Tourism Van Thi Bach Tuyet said the city has planned numerous special programmes in 2015 and aims to attract 4.7 million international visitors in 2015.

The World Heritage site of Hoi An in central Quang Nam province welcomed a group of 68 Polish tourists on January 1, the first foreign visitors to the city in 2015, promising good luck for the new year.

The visitors, who were greeted with flowers and special gifts from local tourist and cultural officials and an art performance, eagerly joined the traditional local games, including Bai choi singing.

One of the tourists, Joanna Dabrowska said she was engulfed in surprise and expressed hope that the ancient town will mark its position in the world’s tourist map.

On the last day of 2014, the city received the 1.7 millionth visitor of the year, who was a German tourist.

On the New Year’s Eve, tourists were entertained by an array of activities and art performances in central Hoi An.

Nguyen Phuc Chu Street, along with a section of Nguyen Hoang Street and An Hoi statue garden was turned into a festive site with food stalls featuring typical dishes, traditional games and foreign bands’ performance, a flash mob by local youths.

Hoi An Ancient Town was recognised by the United Nations of Education, Science and Culture Organisation (UNESCO) as a World Cultural Heritage site in 1999.

The city will strive to attract more than 1.8 million visitors and earn about VND3.56 trillion (US$169.5 million) in tourism revenues this year.

In order to better satisfy its visitors, the city aims to provide new and high-quality services, with focus on community-based tourism in eco- and cultural sites.

The locality also targets to further promote services at the World Biosphere Reserve of Cu Lao Cham, along with implementing several projects on developing infrastructure, especially connecting the island to the national power grid.

As scheduled, a daily flight departs at Noi Bai International Airport for Incheon at 2.25pm with Boeing 737-800 aircraft.

Saigontourist to offer tour to Cuba

The Cuba - Brazil – Argentina tour will give visitors 14 day experiences to tourist sites in the South America, such as Havana, Varadero, Rio de Janero, Iguazu Falls and Buenos Aires.

The Republic of Cuba which is an island country in the Caribbean has a great potential for the tourism development in the Latin America. It is a combination of European, African and Latin America cultures.

A package tour costs VND180 million for one person.