The event will be an opportunity for Vietnam to popularise the country’s cultural values to international friends.

A multitude of activities will be held within the framework of the event, including a commemorative ceremony, a book exhibition, and a conference on the poet’s life and career.

He was born to one of the most aristocratic families in Thang Long Imperial City (Hanoi). His family members were noted scholars and mandarins at the Court during the Le dynasty. His pleasant childhood life was interrupted by the death of his father when he was 9. Three years later, his mother died, as well.

Born and raised in a time of chaos, Nguyen Du witnessed many changes in the transition from the Le to Nguyen dynasties between the 18th and 19th centuries.

A rebellion led by Nguyen brothers from the village of Tay Son in today’s Binh Dinh province, among many revolts by poverty-stricken peasants across the country at that time, put an end to the weakening Le-Trinh dynasty.

The historical upheavals split his family apart and left him in poverty. They also opened his eyes so that he was able to see the naked realities of Vietnam’s feudal society, where the majority of people suffered in misery, inequality and cruelty.

“Upheavals” and “the sights observed”, which are mentioned in one of the first lines of his most beloved work “the Tale of Kieu”, were obvious references to these events in his life.

Though faithful to the Le dynasty, Nguyen Du realised that it was of no avail to follow his dream of restoring the regime and finally accepted the political changes.

After the Tay Son collapsed, Emperor Gia Long, the new Nguyen ruler, called him to the Court. Nguyen Du reluctantly obeyed but felt unimpassioned towards his mandarin career.

The vicissitudes of history and his own life turned him from a nobleman into a humanist and a realist poet whose heart was deeply moved by the lives of the unfortunate.

In his 55 years of life, the great poet left a monumental legacy that includes three collections in Han (Chinese) script, totalling 250 poems in Thanh Hien Thi Tap (Poems of Thanh Hien), Nam Trung Tap Ngam (Various Poems) and Bac Hanh Tap Luc (Miscellaneous Writings in a Trip to the North), as well as the most well-known, the Tale of Kieu.

The 3,254-line classic verse novel written in “luc bat”, the form that consists of alternating lines of six and eight syllables, a traditional Vietnamese verse form, is the most popular Vietnamese poem of all time and has inspired many generations.

It recounts the life, trials and tribulation of Thuy Kieu, a beautiful and talented young woman, who had to sacrifice herself to save her father and younger brother from prison. She sold herself into marriage with a middle-aged man, unaware of his profession as a pimp. He later forced her into prostitution, marking the start of a series of tragic events in her life.

Throughout the poem, Nguyen Du depicted the beauty of true love and loyalty, and the unyielding hope for justice.

The poetic masterpiece has spread its spirit and influences overseas, as it was published in 20 different languages worldwide.

Nguyen Du passed away 200 years ago, but his literary legacy and brilliant career are remembered today by people not only in Vietnam but all over the world.

In 1965, he was honoured as a world cultural celebrity by the World Peace Council with eight others for his devotion to Vietnamese literature and the world’s culture.

On August 15, 2014, the Secretariat of the Communist Party of Vietnam Central Committee officially approved a plan to celebrate the 250th birth anniversary of Nguyen Du in 2015 – a big opportunity for the country to honour its cultural values and instill national pride in its citizens when integrating extensively into the world./.VNA 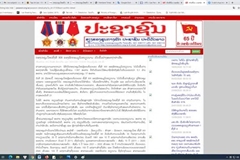