Researchers at the think-tank collected data from various countries and territories to create an interactive to gauge the relative performance at different points in the pandemic. Figures were calculated for the following indicators of confirmed cases, rates of death and test.

On the other hand, developed nations like the US, the UK and France and countries with a larger population were classified as worst-performing. The UK came at the 94th place among almost 100 surveyed countries and territories while Indonesia and India ranked 85th and 86th, respectively.

The report pointed out that smaller countries (with populations of fewer than 10 million people) proved more agile than the majority of their larger counterparts in handling the health emergency for most of 2020. Cyrus, Rwanda, Iceland and Latvia were all in the top 10.

“In general, countries with smaller populations, cohesive societies, and capable institutions have a comparative advantage in dealing with a global crisis such as a pandemic,” according to the report.

The relatively ‘low-tech’ nature of the health measures used to mitigate the spread of the virus to date, including large-scale lockdowns, may have created a more level playing field between developed and developing countries in the management of COVID-19.

Despite this, the uneven deployment of the first vaccines against COVID-19 could give richer countries a decisive upper hand in crisis recovery efforts, and leave poorer countries fighting against the pandemic for longer, it warned./.VNA 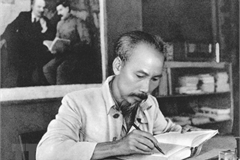 A book entitled “The Black Race by Ho Chi Minh and Selected Works on Systemic Racism” made debut in Canada at a virtual launch on February 20 during which participants highly valued the late Vietnamese leader’s thought of the issue.

ASEAN member states, including Vietnam, have agreed to set aside $10.5 million from the COVID-19 ASEAN Response Fund to purchase vaccines for their citizens on the basis of equal distribution to all 10 countries.

The development of Vietnam's digital economy will create new opportunities for Czech companies operating in this field in the Southeast Asian nation, particularly in cyber security or digital banking, according to Czech diplomat David Jarkulisch.

Vietnam condemns all terrorist attacks and extreme violence in Iraq, Vietnam's representative said at an online meeting of the United Nations Security Council (UNSC) on February 16.

An exhibition featuring large-sized paintings on Vietnam’s landscapes, people and culture opened on February 12 in a pedestrian zone in Budapest, Hungary.

Ambassador Dang Dinh Quy, head of the Vietnamese mission to the United Nations, on February 11 welcomed the positive progress recorded in the implementation of the Minsk agreements over the recent past.