The need for human resources, especially pilots, is becoming serious among Vietnam’s air carriers. Vietnam Airlines, for example, has decided to raise pay for pilots one year ahead of schedule. 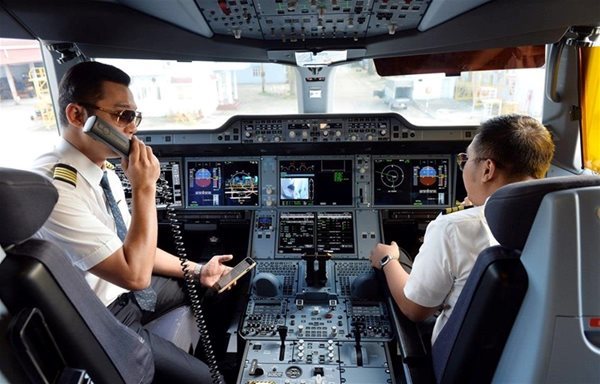 Vinpearl Air is moving ahead with a succession of events to prepare its fleet and staff for the take-off day.

The air carrier is one of three airlines that will join the market in the near future. The other two, also queuing up for licenses, are Vietravel Air and Kite Air.

Analysts say airlines are scrambling for pilots and are willing to pay higher to lure pilots from rivals.

In such conditions, Vietnam Airlines, the nation’s flag air carrier, has decided to increase the pay for the pilots flying with next-generation wide-body aircrafts A350/B787, commencing September 1, 2019, one year ahead of schedule. The pay increase is 22 percent compared with June 1, 2019.

A senior executive of Vietnam Airlines said the state holds 80 percent of the airline's shares, and it is difficult to raise wages for pilots because of the strict regulations. However, as it feels pressure from private airlines which are willing to pay high salaries to attract pilots, Vietnam Airlines is doing this earlier than planned.

Main pilots with sufficient flying hours now receive VND116 million a month instead of VND95 million, while assistant pilots get VND56 million, an increase of VND10 million from the previous level. They also can get other allowances.

As such, main pilots have income of VND229 million a month, while assistant pilots have VND136 million on average. The highest income for main pilots could be up to VND271 million.

However, though wages have increased, the income of Vietnamese pilots is still less than 80 percent of the income of foreign pilots at the same airline.

At present, Vietnam Airlines remains the only airline that uses wide-body aircrafts B787/A350 in Vietnam. It is impossible to compare the pay offered by Vietnam Airlines with other airlines.

Vietnam Airlines now has 23 B787/A350s. Oher carriers are also hurrying to buy wide-body airplanes. Vinpearl Air, for example, plans to have 36 aircraft by 2025, half of which are next-generation wide-body ones. Airlines all have high demand for wide-body aircraft pilots.

A report of the Ministry of Transport submitted to the government two months ago showed that though attractive salaries are offered to pilots, airlines still have to seek foreign pilots, but the quality is limited.