At Vietjet’s most important event in mid-August, when the air carrier, together with Swift 247 and Grab launched an express delivery service, the outstanding name most mentioned was Tommy Nguyen, a co-founder of Swift 247, and son of Vietjet's female billionaire owner Nguyen Thi Phuong Thao. 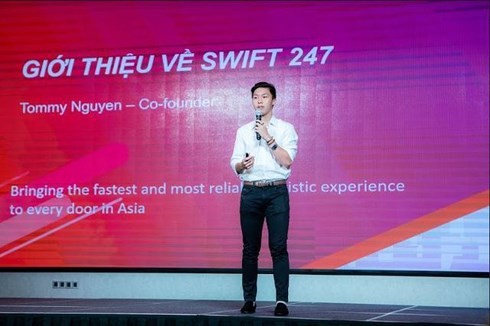 Tommy Nguyen, a co-founder of Swift 247

The son of Do Quang Hien

Do Quang Vinh, born in 1989, is the eldest son of Do Quang Hien. After three years of studying at high school in Singapore, Vinh obtained a master’s degree in the UK in 2013.

He was internal auditor at SHB Bank and credit officer at HanaBank before leaving for the US to be CEO of T&T in the US.

Vinh explained in Dan Tri newspaper why his mother and sons do not hold SHB shares.

“Our family principle is that husbands and wives should not work together in the same companies because of potential conflicts, and they may bring work home, which affects the family’s life,” he said.

“Our parents told us that we will get what we deserve and if children are not ready for the power transfer, share holding is not necessary,” he explained.

The sons of Doan Nguyen Duc

Unlike Hien’s son, the sons of Duc are quiet. While Duc is very famous in Vietnam as his images can be found regularly in local newspapers, his sons are not.

Duc said he is very busy and only has several days a month to meet his family members in Singapore.

The son of Bim Group’s president

Doan Quoc Huy, the son of Doan Quoc Viet, chair of BIM Group, is deputy chair of the group. He began working for the group after finishing University of Southern California as a real estate finance major.

Tran Hung Huy, chair of ACB, is the youngest member of the board of directors of the bank. He is the son of Tran Mong Hung, former chair of ACB.