Vietnamese farmers in misery because of imported meat

VietNamNet Bridge – In the last months of the year, Vietnam’s imports of meat have soared.Despite import taxes, many kinds of imported meat are cheaper than domestic products.

VietNamNet Bridge – In the last months of the year, Vietnam’s imports of meat have soared.Despite import taxes, many kinds of imported meat are cheaper than domestic products. 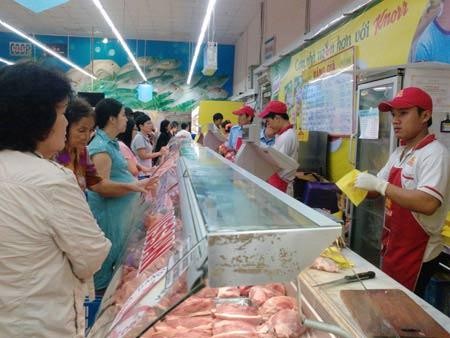 Imported meat at a supermarket in Hanoi.

The owner of a restaurant for workers and students in Binh Thanh District, HCM City said that she has been using imported chicken for over four months because the prices for foreign chicken legs and chicken wings in Metro Cash&Carry supermarkets are only VND20,000-VND25,000 per kilo, less than half compared to local products.

Nguyen Hong Phong - Director of a food import company in HCM City – said Australian beef currently accounts for 70%-80% of the HCM City market, with the price of $3 per kilo compared to $3.5-3.7 per kilo for Vietnamese beef. The Vietnam Livestock Association estimates that this year Vietnam will import 150,000 Australian cows, 2.24 times higher than 2013.

Imports of meat are increasing to serve the upcoming Christmas and New Year holidays. The Department of Livestock reports that so far Vietnam has imported more than 2,350 tons of meat, worth $4.6 million, mainly from the US and Europe. In September alone, the country imported 257 tons of pork, up 70% compared to August.

Imported meat has imposed tremendous pressure on local products. The prices of domestic livestock products have been falling over the past month.

Mr. Nguyen Van Ngoc - Vice Chair of the Poultry Association of Binh Phuoc Province - said in the past ten days, the price of living white chicken fell by VND6,000 per kilo, to only VND27,000-VND28,000/kg, making a loss of VND3,000-VND5,000/kg for farmers. Similarly, the prices for Vietnamese chicken species have also dropped.

According to meat importers, the prices of foreign meat is cheaper than domestic products because products like chicken legs, chicken wings, chicken heart, cow tongue, etc. are by-products overseas but in Vietnam they are considered “specialties”.

Nguyen Van Trong - Deputy Director of the Department of Animal Husbandry - said Vietnamese farmers should join hands to boost chain production to lower production costs and improve productivity. The most important thing is to push quality up and costs down.