VietNamNet Bridge – Not only facing big difficulties because of the weak purchasing power, Vietnamese fashion firms also have to compete fiercely with Chinese low-cost products to survive.

VietNamNet Bridge – Not only facing big difficulties because of the weak purchasing power, Vietnamese fashion firms also have to compete fiercely with Chinese low-cost products to survive. 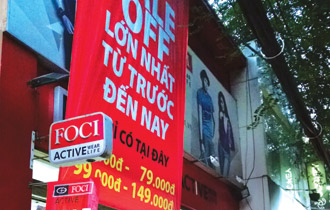 Fashion shops are deserted despite the big sales.

Shabu Kichoo restaurant was full of customers, mostly office workers, during the lunchtime. The Japanese styled restaurant chain proves to be very prosperous with three shops opened in HCM City so far.

The owner of the chain is a well known person in the fashion industry, who founded Foci, a well known Vietnamese fashion brand, 15 years ago.

Making its debut in 1999, targeting medium class customers, Foci had been growing very rapidly with 60 shops opened by 2007. However, Foci’s network has gradually got narrowed over the last two years. The company once saw the turnover tumble by 50 percent.

In late 2012 and early 2013, the owner of the Foci shop on Hai Ba Trung Street in HCM City had to leave the retail premises for another place, where he set up an outlet.

Ngo Thi Bau, General Director of Nguyen Tam Company, the owner of Foci brand, has decided to shift her business to restaurants and international schools.

Bau has set up three restaurants so far, including the ones at Kumho and Vincom buildings, and the other newly opened in district 7.

Bau still continues her job in the fashion industry. However, Foci now does not spend money to develop the retail network any more, but makes uniforms to the outsourced orders by the partners and tries to sell products via Internet.

Especially, Foci, like many other fashion firms, have to struggle fiercely with the low-quality Chinese imports and counterfeit goods. The smuggled goods, entering Vietnam through the border gates have been selling very well thanks to the surprisingly low prices.

“If the Chinese products were imported through official channels, they would not be able to compete with Vietnamese products,” the founder of Foci said.

A senior executive of Viet Tien Garment Company also admitted that Viet Tien has to scale down its production because of the slow sale.

He said though Viet Tien has spent money on the brand recognition system and asked for the competent agencies’ intervention, the company has yield to counterfeit goods.

“We have to narrow the domestic retail network,” the executive said, adding that Viet Tien can find 150 shops that sell imitated Viet Tien products every year.

Meanwhile, Le Tien Truong, Deputy General Director of Vinatex, the Vietnamese biggest garment group, complained that the purchasing power is getting weaker in the context of the economic downturn.

The weak demand has made a lot of fashion brands fall into a bad situation.

In 2011, The Blue signed a contract with Garmex Saigon, under which the former distributes the products made by the latter. However, due to the slow sales, The Blue had owed a big sum of money to Garmex Saigon.