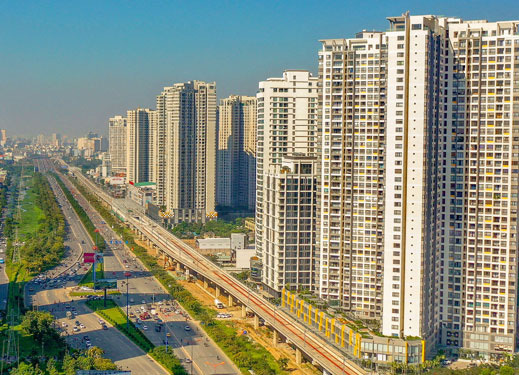 SSI’s (Saigon Securities Incorporated) report about corporate bond market in Q3 showed the value of realty bonds issued had decreased but was still at a high level compared with previous years.

In Q3, businesses issued VND188 trillion of bonds, a decrease of 4.1 percent from Q2, and a drop of 17 percent compared with the same period last year.

The total in corporate bonds issued in the first nine months of the year was VND443 trillion, an increase of 18.6 percent over the same period last year.

Of this, real estate firms issued VND202 trillion worth of bonds, or 45.5 percent, while banks issued VND136.4 trillion, 30.8 percent. They were followed by power and mining companies, with VND22 trillion and 5 percent; non-bank financial institutions VND21 trillion, 4.7 percent; and infrastructure developers VND17.5 trillion, 3.9 percent, and other businesses.

The average corporate bond interest rates, not including bank bonds, in Q3 was 9.3 percent per annum, 1.1 percent lower than late 2020, but still 4 percent higher than the average bank deposit interest rate.

However, a problem exists that most issuers don’t have mortgaged assets for bonds (not including banks and other financial institutions). Only 36.2 percent of bonds in the first nine months of the year were guaranteed with assets, real estate or shares.

Analysts say that the Evergrande ‘debt bomb’ in China has not caused the corporate bond market to be less bustling. The high bond interest rates (the average interest rate in Q3 was 10.34 percent per annum) have prompted investors to continue pouring money into bonds.

The major secured assets for realty bonds are mostly issuers’ investment projects and assets expected take shape in the future, or their shares. About VND140 trillion worth of bonds were partially guaranteed by shares, which accounted for 67 percent.

SSI pointed out that the guarantee of payment of principal and interest with shares doesn’t have much significance. If issuers fall into insolvency, the value of the shares used as collateral will decrease dramatically.

The proportion of businesses issuing unsecured bonds was relatively high, 15.8 percent. Many of them are unlisted companies, which means that investors don’t have much information about them as bond issuers.

This poses high risks for investors if real estate firms have difficulties in their business and cannot pay principal and interest.

The corporate bonds issued in Vietnam so far have not been given credit ratings, while many bonds don’t have mortgaged assets and guarantees for payment. Many businesses issue bonds at high interest rates but cannot show convincing business plans, which raises worries about their solvency.

Analysts said the risk of insolvency is not high at this moment, because most of the issued bonds are due in 2023-2024. However, they warned that the Covid-19 pandemic may accelerate the risk.

The liquidity of the real estate market is on the decrease as the absorption capability is weakening. Plans on developing projects and opening new projects for sale have been postponed because of the pandemic. Meanwhile, infrastructure development projects under the framework of public investments are going slowly.

These factors all lead to higher capital costs and affect issuers’ debt payments. The situation may get even worse as some businesses issue new bonds to get money to pay old debts.

To restrict the issuance of unsecured bonds, the Ministry of Finance in October asked for inspections of 10 securities companies. It has checked some businesses that issued large amounts of corporate bonds or bonds with no mortgaged assets.

The ministry is drafting a circular that will set stricter regulations on businesses’ issuance of corporate bonds, including bonds issued privately by businesses that are nonpublic companies. The businesses must have mortgage assets when issuing bonds or have a payment guarantee.