VietNamNet Bridge – Footwear, handbags, household appliances and cosmetics available in the market bear Vietnamese brands, but, in fact, they are made in China.

VietNamNet Bridge – Footwear, handbags, household appliances and cosmetics available in the market bear Vietnamese brands, but, in fact, they are made in China. 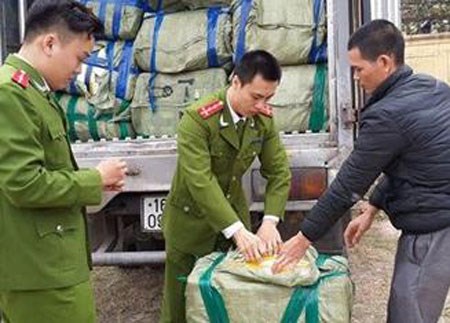 The HCM City Market Control Task Force in early March discovered a consignment of 3,000 footwear, clothes and mobile devices with Nike, Gucci and Versace brands. Though the labels showed the Vietnamese origin of the products, officials also saw tags with Chinese words.

Prior to that, the Steering Committee for anti-smuggling, trade fraud and counterfeit goods (Committee 389) discovered four trucks carrying about 100 tons of smuggled goods from the border area to the northern provinces.

There were clothes, motorbike components, electricity-run bicycles and household use products found in the trucks. And all of them were from China. However, many products were labeled as Vietnamese products.

The labels on the household-use appliances showed that products were made in Ha Dong district in Hanoi with the warranty period of one year. There were certificates on meeting Vietnamese standards, recognized as “Vietnamese high-quality products”.

An official of the Committee 389 noted that if the goods could easily penetrate the market, they would be sold at high prices because Vietnamese consumers now prefer Vietnamese high-quality products to Chinese ones.

The HCM City Market Control Task Force also found thousands of labels with information written in Vietnamese, which are tagged on the Chinese products by small merchants when they sell them in local markets.

However, Chinese-made counterfeit goods will not only harm Vietnamese consumers, but also domestic production, analysts warned.

A report released by the Vietnam Chamber of Commerce and Industry’s WTO Center showed that it was a difficult for Vietnamese agencies to control the goods from China through 29 major border gates and other subordinate gates.

In 2012, Vietnam reported that it imported $28.8 billion worth of products from China, while the figure reported by China was $34 billion.

While Vietnam reported that it exported $12.8 billion worth of products to China in the same year, China released the figure of $16.2 billion.

The gap in the statistics, as analysts say, is explained by the fact that traders did not declare imports and exports to evade tax.

“This shows that smuggling across the Vietnam-China border is complicated,” the report concludes. Loose control over imports/exports, paving the way for low-quality products to penetrate Vietnam, will seriously harm domestic production.

Bui Ngoc Son from the Institute for World Politics and Economics Studies noted that the “buy Vietnamese” campaign would not have much significance if Vietnamese, by accident, still use low-quality Chinese products that bear Vietnamese brand names.