The Embassy of Japan in Vietnam on July 11 opened a book of condolence for late Japanese Prime Minister Shinzo Abe. On behalf of senior Vietnamese leaders, President Nguyen Xuan Phuc and Prime Minister Pham Minh Chinh came to pay homage and wrote in the book of condolence at the Japanese Embassy in Vietnam.

The Vietnamese leaders conveyed the deepest condolences of the Party, State and people of Vietnam to the Liberal Democratic Party (LDP), the Government, the people of Japan and the family of the late PM. They said Abe had left meaningful imprints on building and consolidating the Vietnam - Japan extensive strategic partnership for peace and prosperity in Asia. The special affection and valuable support that he had for the country and people of Vietnam as well as the friendly cooperation between Vietnam and Japan will always be cherished by Vietnamese leaders and people. 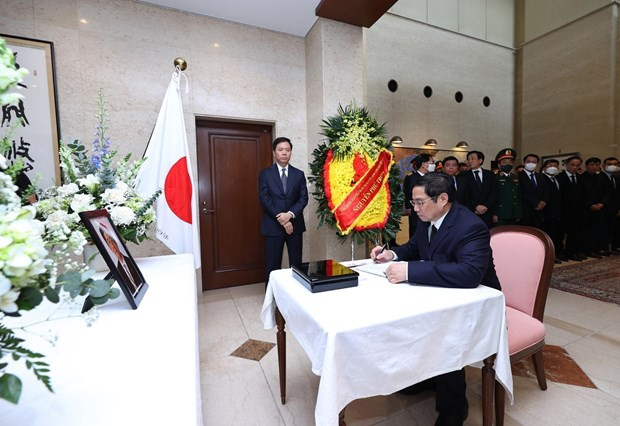 The former PM of Japan passed away at Nara Medical University in Nara prefecture on July 8. Earlier the same day, he was shot from behind while campaigning for a candidate of the ruling LDP in the prefecture.