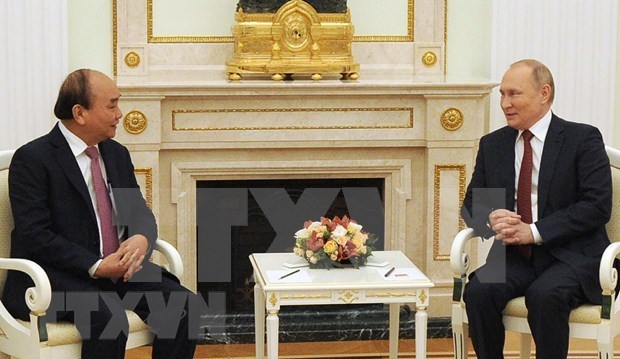 With a busy agenda, the Russia visit by Vietnamese President Nguyen Xuan Phuc was impressive, helping both countries make comprehensive analysis on the achievements and sketch out future plan to further accelerate bilateral ties across many sectors, stated Andrey Vladimirovich Yatskin, First Deputy Chairman of the Council of Federation (upper house) of the Federal Assembly of the Russian Federation.

Speaking to a Vietnam News Agency correspondent in Moscow on the visit, Yatskin said that the Vietnam-Russia relationship is experiencing a period of strong growth and need to be further reinforced.

He noted that the two countries share a special relationship not only in terms of politics but also in the sentiment of people of both sides towards each other, and the elevation of bilateral ties to a comprehensive strategic partnership in 2012 reflected their sound relationship.

Yatskin noted that the economic partnership between Vietnam and Russia is expanding impressively, with two-way trade reaching 5.7 billion USD in 2020, up 15 percent year on year despite COVID-19 impacts. This year, the figure is expected to hit 6.5 billion USD. He attributed the results to the efficiency of the free trade agreement between Vietnam and the Eurasian Economic Community (EAEC) that was signed in 2015.

At the same time, the two countries have enjoyed sound cooperation in science, with Russian atomic firm Rosatom supporting the building of an atomic science and technology centre in Vietnam, he said. Besides, the two sides boast a high potential of cooperation in information security as it is a strength of Russia, he said, suggesting that both sides should make digital economy a new cooperation pillar.

The legislative leader said that COVID-19 is a test for bilateral ties, and Vietnam and Russia have given each other great support. Vietnam is among the first countries in Southeast Asia to permit the use of Russian-made Sputnik V COVID-19 vaccine and also one of the first to produce the vaccine, he noted.

Over the education field, he said that this is an important cooperation area of both sides. Thousands of Vietnamese experts have been trained in Russia, he said, adding that this year, about 1,000 Russian scholarships have been granted to Vietnamese students. Currently, Russia is hosting about 6,000 students, post-graduates and apprentices from Vietnam.

Yatskin highlighted that during the Vietnamese leader's visit, a series of cooperation agreements were signed between the two countries in trade and trade as well as other sectors.

Parliamentary collaboration between the two sides have received increasing attention, he said, stressing that parliamentarians of both sides are responsible for supporting the implementation of initiatives raised by leaders of the two sides and help remove barriers hindering the bilateral partnership through parliamentary dialogues that they are developing.