The Russian leader told visiting Prime Minister Nguyen Tan Dung during talks in Moscow yesterday, May 14, he appreciated Viet Nam's socio-economic achievements, saying that they contributed to enhancing the country's position in the region and the world.

Dung stressed that Vietnam welcomes Russia's achievements in modernising the country as well as in strengthening and enhancing its role and important contributions to ensure security, co-operation and prosperity in the world.

The two PMs exchanged opinions on orientations and measures to implement the comprehensive strategic partnership between the two countries in the fields of politics, economics, trade, investment, energy, defence and security, science and technology, plus education and training.

Regional and international issues of common concern were also discussed by the two leaders.

They agreed that the reliable political relations between the two sides should be further strengthened through delegation exchanges of all levels, especially at the top-level.

Regarding economic co-operation, both leaders said the two countries had seen much progress in recent times with strategic projects in the fields of trade, energy, oil and gas, nuclear power and mining.

They spoke highly of the outcomes of the first round of negotiations on a free trade agreement between Viet Nam and the Customs Union of Russia, Belarus and Kazakhstan, in Ha Noi in March 2013, affirming that the signing of this document will be the breakthrough in realising the goal of raising bilateral two-way trade value to US$7 billion by 2015 and $10 billion by 2020.

As for energy co-operation, Dung and Medvedev pledged to continue creating favourable conditions for the operation of the two sides' oil and gas businesses in each country. They also encouraged the establishment of new joint ventures in the sector.

Viet Nam and Russia will continue to work together to ensure the construction of the Ninh Thuan I nuclear power plant.

In the field of military co-operation, the two leaders agreed to continue with measures to raise their defence ties to a new height in a more comprehensive manner.

They also agreed to continue boosting bilateral co-operation in the fields of science-technology and education and training to bring it to a strategic level while stepping up the establishment of the Viet Nam-Russia Technology University in Ha Noi.

The two leaders valued the contributions made by Vietnamese citizens in Russia and Russians in Viet Nam, saying that the two sides would continue creating comfortable conditions for the people in each country in line with their respective laws.

Meanwhile, the Vietnam National Oil and Gas Group signed a Memorandum of Understanding on producing and using gas as fuel with Russia's Gazprom, an agreement on the establishment of a drilling joint venture in Russia with Zarubezhneft, and a protocol on oil refinery and petrochemical and oil and gas exploration with Gazprom Neft.

Then, the two Prime Ministers met with the media to inform them of the outcomes of their talks. At the meeting, Medvedev affirmed that Russia attached special importance to boosting co-operation with Viet Nam and would do its utmost to work with Viet Nam to further deepen the two countries' relations.

He expressed his hope that the two sides would soon sign agreements to foster economic ties and agree on investment-prioritised lists, especially in energy, infrastructure, culture, education and tourism.

Dung affirmed that Viet Nam would always remember Russia's support in the past and present, and make every effort to develop the Viet Nam-Russia comprehensive strategic partnership for the common benefit of the two peoples and for peace, stability and prosperity in the region and the world.

As part of his official visit to Russia, Prime Minister Nguyen Tan Dung yesterday met with Speaker of the State Duma of Russia Sergei Naryshkin.

Dung briefed Naryshkin on the outcomes of his talks with Prime Minister Dmitry Medvedev.

He stressed that with the two sides' political determination, bilateral relations between Viet Nam and Russia would become increasingly effective and practical, making important contributions to each country's development and meeting the desires of the two peoples.

On the occasion, Dung conveyed an invitation by Chairman of the National Assembly Nguyen Sinh Hung to the head of the Russian Duma to visit Viet Nam.

Naryshkin appreciated the friendship and co-operative relations between the two countries over the time. He also noted Dung's contributions to boosting bilateral co-operation ties.

Dung and Naryshkin were also pleased with the fine co-operation between the two countries' legislative bodies. 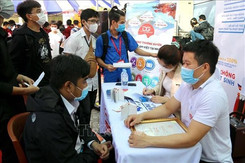