Students planning to study abroad this year may have to postpone or delay the plans because of the epidemic. Large universities have also adjusted their enrollment schedules.

The Ministry of Education and Training (MOET) has decided that the 2019-2020 academic year must finish prior to July 15, and that high school finals will take place on August 8-18. 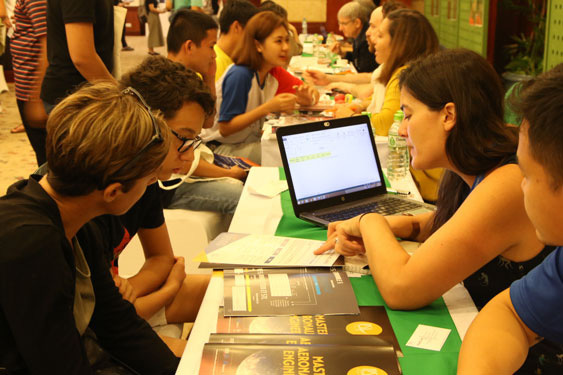 Many students have expressed their worries that they may miss enrollment in overseas schools or miss opportunities for scholarships.

Tran Van Anh, a 12th grader of Le Hong Phong High School for the Gifted, said she planned to go studying in Singapore in mid-July. However, because of the epidemic, schools have closed, while she is not sure about the school start date and deadline for application submission. Soshe decided to delay the plan to early 2021.

According to Tran Phuong Hoa, managing director of Summit, an education institution, most students planning to study abroad in autumn 2020 received results before May and are awaiting visa procedures to be fulfilled. However, foreign embassies in Vietnam, referring to the reports about the epidemic situation, have stopped or restricted granting visas.

Bastien Palermo-Chevillard from the French Embassy in Vietnam said the number of interviews for those who applied for schools in France has decreased, which shows the students’ worries about the epidemic situation in France and other countries.

However, this doesn’t mean that students have to cancel their study abroad plans. They are still keeping a close watch over the general situation before making decisions on whether to pursue their study plans.

Consular agencies on March 18 stopped granting visas to students planning to study in France until further notice. The closure of the border and the absence of international flights make it impossible for students who have visas to go to France. However, the visas will still be valid and they will be able to go to France as soon as the situation allows it, according to the official from the French Embassy.

He affirmed that the suspension of consular agencies doesn’t affect students, because most of them apply for visas from June to August.

Also according to Bastien Palermo-Chevillard, "Etudes en France", the deadline for interview under Etudes en France, the concentrated enrollment program in France, will be extended from April 30 to June 7.

In the US and Canada, some schools have adjusted their enrollment policies, easing requirements on standardized tests used to select students, including SAT Scholastic Assessment Test) and ACT (American College Testing).

85 percent of articles in international publications are from education sector

A new study by Duy Tan University found that 12,307 articles in international publications in 2019 can be found at Vietnamese addresses, 85 percent of which were by researchers in the educational sector.

Four people who refused to work for local agencies after finishing overseas training courses funded by Quang Ngai province have been forced to pay 200 percent of the training fee.