After 10 months of work, the research team of the Applied Chemistry-Physics Laboratory at the school successfully created lithium-iron battery from rice husks. This is the first time Vietnam has made a battery from the material. 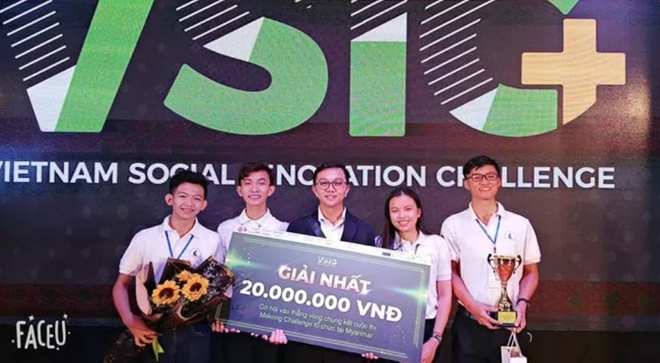 The students from the HCM City University of Natural Sciences

In general, the battery has two electrodes, positive and negative. The material used to make negative electrodes in batteries is carbon graphite, a commercial product exploited from fossil fuel – coal, which has limited capacity. Positive electrodes are made of lithium cobalt oxide.

After use, the batteries will become waste. If the waste cannot be collected and treated properly, it will cause environmental pollution and significant harm to public health.

To solve this problem, many scientific research organizations around the world have proved that silicon (Si) materials can be used instead of graphite carbon to make negative electrodes, safer for the environment and a few dozen times larger in capacity. However, it is very costly to synthetize Si.

The group of students from the Applied Chemistry-Physics Laboratory decided to use SiO2 to make negative electrode. SiO2 is the main component of rice husk.

According to Vu Tan Phat, a member of the research team, rice husks, after being brought from Tan Tru district, are synthetized through a special inert gas burning process. The product of the process is carbon-covered silicon material, suitable to be used for negative electrode of lithium-iron battery. With the materials synthetized, the researchers can make button cells.

After testing, the researchers found that the capacity of the battery could be up to 3,000 mAh/g, higher than the 300 mAh/g of current common graphite. The battery operates stably for 500 test cycles (1 cycle per day), and it can absolutely replace carbon graphite.

As for rice husk, the synthesis process is very easy which doesn’t need expensive materials. Only two chemicals, CaOH and HCl are needed for the process.

“After the synthesis process, the waste product is CaCl, a substance just like salt, very friendly to the environment. All the rice husk ash after being synthesized will be used, therefore, the process is safe to the environment,” Phat explained.

The research team is also trying to replace the material to make anode electrode with lithium cobalt oxide from rice husks, and replace cobalt and nickel, which are heavy metals, with lighter metals such as manganese, iron, and silicon.

The battery project won first prize at Vietnam Innovation Challenge 2019. It has paved the way for Vietnam to produce rechargeable lithium-iron batteries.