For a long time, global technology groups like Microsoft, Intel and Qualcomm have their representative offices in Vietnam just to help boost sales. However, the relations between them and domestic enterprises have gone much further in recent years.

VietNamNet Bridge – For a long time, global technology groups like Microsoft, Intel and Qualcomm have their representative offices in Vietnam just to help boost sales. However, the relations between them and domestic enterprises have gone much further in recent years. 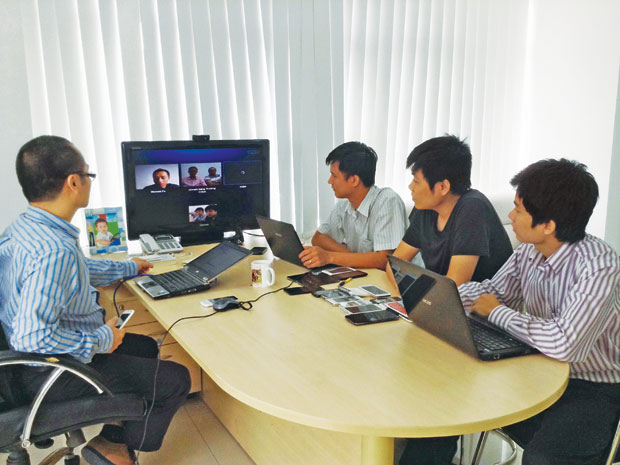 Mobiistar’s CEO Ngo Nguyen Kha said the co-organization of the forum shows a new development level in the relation between Mobiistar and MTK.

According to Kha, Mobiistar began learning about the chips made by MTK in late 2008, while the first feature phones of Mobiistar used MTK’s chips were marketed in June 2009.

At that time, MTK and Mobiistar were simply seller and buyer. Only since early 2012, when Mobiistar began making the S01, the first generation of smart phone, has the relation of the two sides entered a new stage of development.

In 2007, a group of experts on IC design solutions from Synopsys in the US arrived in the HCM City National University’s Integrated Circuit Design Research and Education Center (ICDREC).

They introduced to the learners at ICDREC’s what the IC design means, lent software and machines for practice. The learners in 2007, who got familiar with IC design, have become the experts and the partners of Synopsys. The teacher - learner relation between Synopsys and ICDREC has turned into the partnership.

Four years ago, the technique team of Mobiistar was also the “students” of MTK. After a period of working with MTK specialists, Kha said MTK is now capable enough to talk with MTK about technology, product quality, and technical errors from simple to complicated.

“The ability of Vietnamese manufacturers to utilize advanced technologies in their products, from the designing to technique has been improved considerably,” Nam said.

“They now can master the technologies and the production process,” he added.

A Vietnamese manufacturer revealed that in previous years, Vietnamese engineers felt hesitant when working with Qualcomm’s specialists due to their limited knowledge and English skills. However, things have got quite different.

According to Tri, since 2013, Microsoft has provided support to strategic partners, ministries and branches, enterprises and consumers instead of simply selling products and protecting software copyright.

It has transferred the technology on converting the computer-based apps from Windows XP to Windows 7/8 to FPT, so that the Vietnamese partner can support other domestic enterprises.

Microsoft Vietnam has chosen HPT as the partner in the system integration. With the partnership, HPT can access Microsoft’s knowledge store to update information and products of Microsoft.

Qualcomm has been providing big supports to the application development through the annual competitions organized since 2007. With the advantage in processor chips and 3G chips, Qualcomms has provided support to domestic manufacturers, including FPT, Viettel, Q-Mobile and Mobiistar to make the products suitable to the domestic market.