Anex Vietnam, a tourism firm which receives more Russian travelers than most other travel firms, has decided to temporarily stop receiving Russia tourists who want to go to Nha Trang (Khanh Hoa). 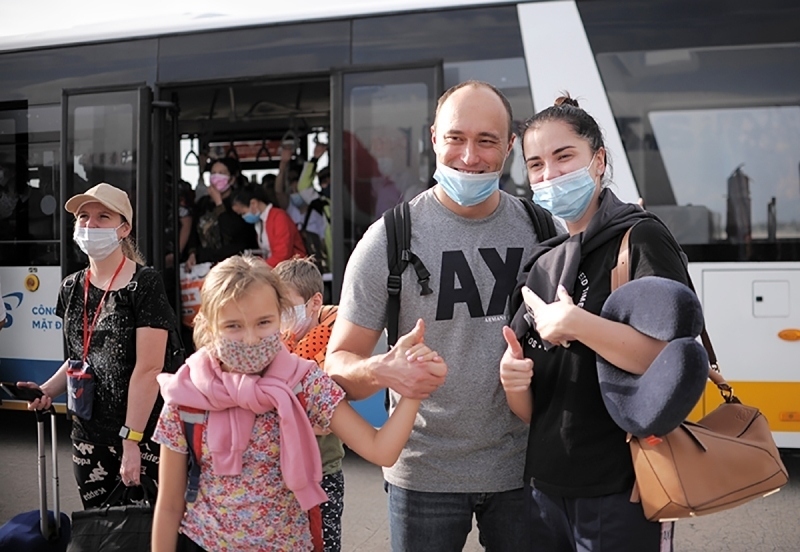 Over 300 Russian travelers left Cam Ranh on a chartered flight on March 17, 2022. They were the last Russian clients that Anex Vietnam served before the travel firm decided to temporarily stop receiving Russian travelers.

Bui Quoc Dai, deputy director of the company, said the company made the decision after the Russian Government recommended that airlines restrict flights abroad after the US and western countries imposed sanctions against Russia.

“We have to stop receiving Russian travelers at least until March 28 in order to ensure aviation security. When the situation becomes stable again, we will resume flights,” Dai said.

The last 300 Russian travelers left on March 17 to return to Russia. Anex Vietnam had to lease an airplane which flew empty from Russia to Vietnam to pick up the 300 travelers.

The number of Russian travelers to Vietnam has dropped significantly because of the Russia-Ukraine conflict, the ruble depreciation, and the sanctions on Russia imposed by western countries.

Anex Vietnam has received 6,000 Russian travelers to KhanhHoa under the vaccine passport program since December 26, 2021. However, it incurred losses as it could not fill up chartered flights.

Earlier, the Russian Federal Air Transport Agency recommended that Russian airlines temporarily stop all international flights from March 6 amid the possibility of seizure of aircraft overseas, which have relations to sanctions imposed on Russia.

The recommendation was applied to airlines whose aircraft are registered in the registration books of other countries under leasing contracts signed with foreign institutions. Since March 8, Russia airlines have also temporarily stopped flights from other countries to Russia.

Many Russian travelers have canceled tours to Vietnam. Nguyen Duc Tan, CEO of Anex Vietnam, said in late February that the cancelations began before Tet (early February) and the figure has increased as Russians have hesitated to travel in the current situation.

A report from the Ministry of Culture, Sports and Tourism (MCST) showed that as of February 10 Vietnam had received 9,000 foreign travelers under the passport pilot program. The travelers were mostly from Russia, Uzbekistan, Kazakhstan, South Korea, Singapore, the UK, the US and Canada.

Foreign travelers are looking forward to hearing the news about Vietnam’s reopening but many still cannot make a decision because of the lack of information.

Being ready to welcome international tourists from March 15, Hanoi introduces many attractive heritage tours to discover the rich historic and charming capital city.