Some people have exploited the flaws in YouTube’s new algorithm to play dirty tricks on video channels.

Vietnam is considered a ‘paradise’ for view and subscriber trading, where people sell a service that helps increase the numbers of views and subs. 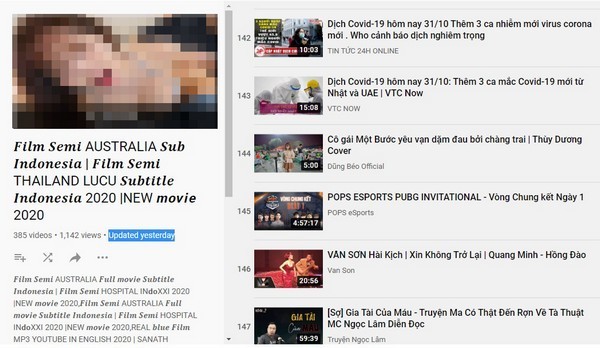 Despite its great efforts, YouTube still cannot settle the problem as more and more people are rushing to produce YouTube videos, which has led to high demand for views and subs.

There are ‘clean’ views, i.e. views created in a legal way, when people use many different computers and mobile phones with different IP addresses to repeatedly watch the same clips. In Vietnam, this is called ‘cay view’ (digging for views).

There are also ‘dirty’ views, i.e. the views created by cheating. Sellers create a playlist of ‘adult’ videos at random, and cut and paste and insert with thumb images, with 18 or more images. The clips, just less than one second, or just several minutes long, appear right before ‘hot scenes’, followed by the clips of view buyers.

With this, views come unnaturally, but this is enough to help them reach their goal.

However, view sellers have had to change their ways to obtain views as YouTube changed the algorithm in mid-November and punished all the clips inserted into the same playlist of this kind. The channels with videos in the playlists will be lower in recommendations, and will have fewer views.

However, a problem has arisen that many videos with no relations have appeared in the 18+ playlists created by view sellers.

As a result, a lot of videos of large channels have been affected, including channels of televisions and newspapers. VTC Now, for example, has been slightly affected.

Le Trong from HCM City said the number of views from recommendations on the channel that he manages has dropped from 61.2 percent to 10.7 percent.

Trong said he contacted YouTube to clarify the issue, but has not received satisfactory feedback.

“The problem is that everyone can create playlists 18+ and insert any video they want. YouTube will have to either revive old algorithms, or remove all dirty clips from the platform,” said Dung Vu, a member of Hoc Vien YouTube.

The number of videos removed from YouTube because of violations of YouTube community policies in Q3 2020 decreased slightly compared with the previous quarters.

In Q3, Vietnam had 173,247 videos removed, a 28.3 percent decrease compared with Q2. However, Vietnam jumped three grades from 12th to 9th among the countries with highest numbers of videos removed.

According to MIC, Vietnam has 15,000 YouTube channels with monetization turned on, of which 350 channels have large revenue with 1 million followers or more. However, only 5,000 channels are under the management of MCNs (multi-channel network).

History teachers and headmasters of high schools said they are impatient to know the results of the arguments about the teaching of history as the new academic year nears.