*  In rural areas, areca spathe was used to make fans in the past. But after electric fans appeared, it became useless. Very few areca trees are grown now, because only old women chew betel and people use betel and areca as betrothal gifts. 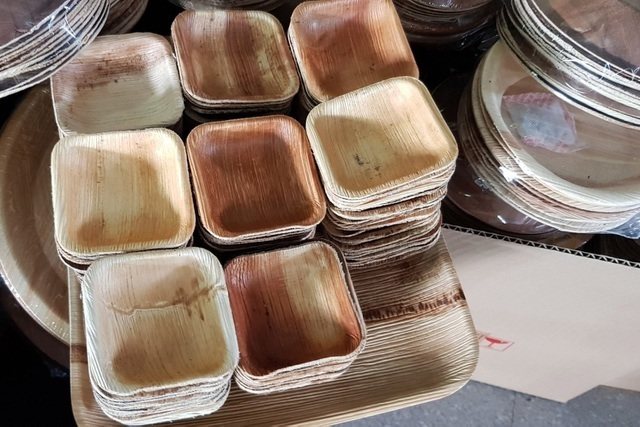 The products made of areca spathe

However, when people all over the world are trying to reduce plastic waste, areca sheaths are now beibg used again as environmentaly friendly products.

Nguyen Van Tuyen from Quang Ngai province is famous for his products made of areca sheaths. In October 2019, he decided to make cups from areca sheaths.

Areca sheaths are cleaned, dried, pressed by heat and sterilized to make cups, plates, spoons and trays. Every month, Tuyen sells 50,000-60,000 products from areca sheaths, priced at VND1,000-3,000 each, bringing profit of VND100 million. The products are for domestic consumption and export.

*  Water hyacinth stalks, which are usually thrown away or used as food for animals, can be made into valuable handicrafts by craftsmen in Kim Son district in Ninh Binh province, or in Phu Xuyen district in Hanoi.

After harvesting, artisans cut off the roots and leaves and then dry the stalks to be used as materials for weaving export items. The products created from water hyacinths are very diverse, from carpets, baskets, newspaper shelves, baskets and paper trays, to flower pots and living room chairs.

They are not only favored in Vietnam, but also in Asian, American and European markets.

*In the past, straw was used to feed cattle or burned after rice harvesting. But now, merchants go directly to the fields to collect straw, because it is now very useful: used to make feed for animals, mushroom embryos and paper. Straw is also used to make handicrafts for interior decoration.

Plaiting dry straw to create animal toys has been done in communes of Kim Son district (Ninh Binh) for years. The main material to make straw animals is dried aromatic rice stalks. These straws are plaited into animals with interesting shapes. In Japan, they are sacred animals for worship.

* Many enterprises in Dong Thap and An Giang can process rice husks into firewood for export.

A company in Dong Thap presses rice husk into bullets and sells for VND1,000 per kilogram. It exports 10,000 tons of rice husk-made firewood to South Korea and Europe.

*Corncobs are no longer thrown away, but collected for export to South Korea and Europe.

South Korea began importing corncobs from Vietnam in 2016. They are used as animal feed or to grow mushrooms. Japan imports 250,000 tons of corncob a year for animal feed. The by-product is also used to make activated carbon.

*  Banana stalks in Vietnam have typically been used for feeding pigs, or have been discarded. But the banana fiber market has been developing for 15-20 years.

The largest banana fiber exporters in the world such as the Philippines, India, China earn billions of dollars each year.

Banana fiber is lighter than bamboo fiber and has high water resistance and a long life span, so it can be used to make a variety of products such as handicrafts, paper of different kinds and materials in the automobile industry.

A cooperative in Phu Xuyen district in Hanoi presses banana stalks into fibers for export.

*  In Ben Tre, people earn millions of dong each month by selling coir. Export companies each year provide hundreds of thousands of tons at the price of $170-350 USD per ton.

*Bagasse is exported to South Korea and Japan at the prices of $120-250 per ton.

The agriculture ministry has devised measures to turn Vietnam into one of the world’s most 15 developed countries in terms of agriculture by 2030, and among the top 10 farm produce processing hubs.