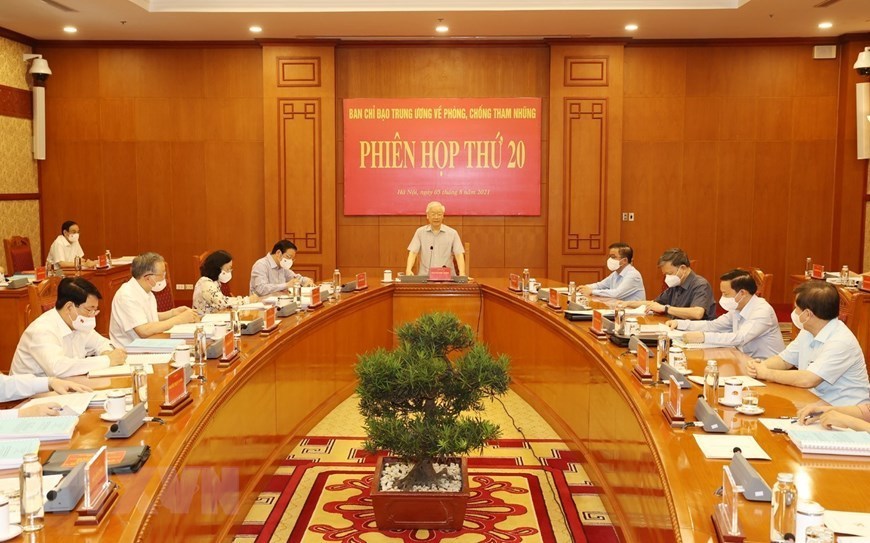 In addition to the corrupt acts that have been clearly defined by law, there are also countless other negative behaviors that are the seeds or manifestations of corruption that we need identify and fight against.

Addressing the issue, Party Committee Secretary General Nguyen Phu Trong, Head of the Central Steering Committee for Anti-Corruption, emphasized: “We need to not only fight against corruption in the economic field. More importantly, we must struggle against the wrongdoings in political ideology, morality and lifestyle”.

Negativity and corruption have a close relation. Therefore, to fight corruption effectively, we need to fight it from the root, that is, against the negativity in political ideology, morality, and lifestyle. Anti-negativity is preventing corruption one step ahead, so we can settle the corruption from the root to the top.

A Party member who is politically and ideologically degraded, corrupted in moral qualities, who enjoys lavish pleasures will diverge from the Party's Charter and principles, and come close to the bad habit of flattery and soliciting positions. They will be easily debauched by money and perform acts contrary to moral conscience, and violate the law.

A series of recent cases can prove this. The most visible cases are the violations of cadres and Party members at high positions, which were shown in the ‘Covid test’.

A Deputy Chief of Office disregarded the central government and the city’s directives on pandemic prevention and control. He spoke loudly and slapped a medical worker just because the worker did his official duties to prevent violations. A tax officer aggressively insulted the control team with the words which are taboo for a public agency officer: "If I don't work, you guys won't get paid".

More seriously, officials of departments are still behaving in a carefree way by playing golf in a pandemic area despite the social distancing order. They ignore the Party’s rules, the State's laws, the criticism and ridicule of people and society. Those are the manifestations of degradation in ideology, the degradation of moral quality and lifestyle.

They ‘forget’ the responsibilities of a normal citizen, let alone a cadre and Party member who needs to be exemplary in fighting Covid-19. They are no longer worthy of standing in the contingent of those entrusted with responsibility by the Party, State and people.

Rule by law and rule of virtue

This shows that we have entered a new stage of the battle against corruption. We not only need to promote the handling of corruption cases and strictly punish violators, but also need to focus on the fight against negative activities, which are believed to be the root of corruption.

Negative manifestations are not a new problem. The Resolution of the 4th Central Committee, Tenure 12 names 27 manifestations of deterioration in ideology, morality, lifestyle, self-evolution, and self-transformation.

Dr Nguyen Thai Hoc, Deputy Head of the Central Committee for Internal Affairs, put emphasis on a number of behaviors that need to be identified.

They are: Incorrectly and inadequately complying with the Party's principles, especially the principles of democratic centralism, self-criticism and criticism; degradation of political ideology, bureaucracy, lack of responsibility, loosening of leadership and management; dishonestly declaring assets and income; violating regulations on management and use of state budget finances and assets; obstructing or illegally interfering in examination, inspection, investigation, prosecution and adjudication activities; keeping group interests, tenure thinking, having power ambitions; and covering up for the behavior of soliciting for positions, and other negative behaviors.

A new chapter has begun in the history of Vietnam’s fight against corruption. The anti-corruption task under the direction of the Party headed by the General Secretary will be more difficult and drastic, but we have confidence in success after we gained encouraging results and because we have the right orientations for the coming time.

Along with continuing to detect and strictly handle corrupt acts, we need to promote the fight against negative activities among cadres and party members under the rule by law and rule of virtue.

President Ho Chi Minh pointed out: “Revolutionary morality does not fall from the sky. It develops and strengthens through the process of constant daily training and struggle. It is just like a pearl: the more the pearl is polished, the brighter it will be."

Director of the Legal Department/Government Inspectorate

The investigation police agency today decided to take legal action against Tran Van Nam, former Secretary of the Party Committee and former Vice Chairman of the People’s Committee of Binh Duong, for his wrongdoings.