PM Nguyen Xuan Phuc at a conference on Vietnam’s aviation industry held several days ago warned of risks threatening aviation security and safety, while mentioning the unhealthy competition in the market. 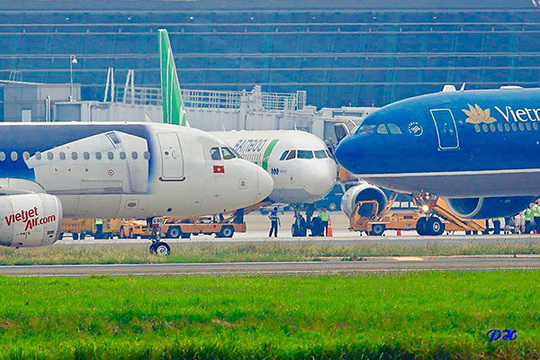 Vietnam has been one of the fastest growing aviation markets in the globe over the last decade. IATA predicted a 15 percent growth rate per annum for Vietnam for the time to come.

However, Vietnam only has five domestic air carriers, much lower than other countries in the region, which means there are still big opportunities for others to join the market.

However, as analysts commented, the battle for market share among air carriers is cutthroat. This is attributed to the lack of two major resources – infrastructure and labor force.

Nguyen Thien Tong from the HCMC University of Science and Technology cited the lack of pilots as a burning issue of Vietnam’s aviation industry.

He said the problems of capital and aircraft can be easily settled, but it is not easy to resolve the shortage of pilots.

New airlines tend to pay more to induce pilots from other airlines because they don’t have enough time to train pilots. The airlines which lose pilots have to reduce their flight frequency, or delay and cancel flights, and the airlines poaching pilots from others today may become victims tomorrow.

Tong said unhealthy competition and the pilot shortage are dangerous for the aviation industry, because pilots will have to fly more than they are permitted, which poses threats to aviation security.

An expert said the state plays a very important role in regulating the aviation market. The state should not allow the establishment of many airlines if it finds that the human resources are not good enough.

“The Civil Aviation Authority of Vietnam must better understand the labor market so as to make reasonable decisions,” he said.

Meanwhile, many airlines are queuing up to get licenses in Vietnam.

Two months after the plan to team up with Air Asia Investment to set up a low-cost carrier broke down, Thien Minh Group decided to establish an aviation joint stock company with charter capital of VND1 trillion.

Meanwhile, Vietstar has been awaiting a license for the last three years. And Vietravel, a travel firm, in June asked for permission to set up VIetravel Airlines.

Sources said in late May, a private corporation with huge capital asked for permission to set up a traditional 5-star airline.