At farms of Huy Long An Company, harvested bananas go to the processing area where they are cleaned, packed and put into boxes. From there, they will be shipped to Japan, South Korea, China and Malaysia. 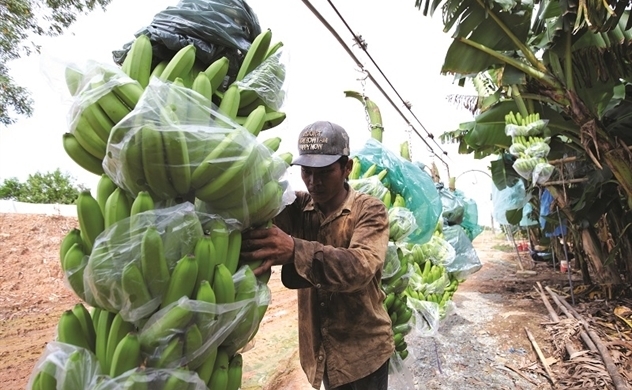 In 2014, Vo Quan Huy, director of Huy Long An, decided to invest $4 million to grow 200 hectares of bananas. One year later, he began exporting bananas, mostly to Asian markets.

He said the banana import turnover globally is $15-17 billion per year. Japan is the biggest importer, 1.2 million tons a year, while South Korea imports 1 million and China 1 million.

Previously, Huy Long An exported 2-3 containers of bananas a week, but now it exports 10 containers, of which 4 40-feet (15-20 tons) containers go to Japan.

Mai Tuan Anh, director of Fohla, a subsidiary of Huy Long An, confirmed this, saying that the company would join forces with farmers to increase the total banana growing area to 700 hectares.

To be eligible to export bananas to Japan and South Korea, Huy Long An has to satisfy more than 200 quality standards.

It is more difficult to grow bananas in Vietnam than other countries because of increased labor cost and lower productivity.

The productivity is 1.3 workers per one hectare in the Philippines, for example, while the figure is 1.5-1.7 workers in Vietnam.

Regarding the labor cost, the figure is $200 and $300 a month in the Philippines and Vietnam, respectively. Meanwhile, the volume of rotten bananas in Vietnam is higher, up to 25 percent compared with the 15 percent of the Philippines.

Bananas are now in very high demand. Le Sy Cong, director of Laba Da Lat said the demand is extremely high and the supply is not enough.

Laba’s bananas have also been exported to Japan for the last few years. Tons of bananas are sold in Japan, while 500 tons have been shipped to Australia.

After unsuccessful trials with other kinds of fruits, Hoang Anh Gia Lai group decided that in 2019, it will focus on developing banana farming, striving for revenue of VND10 billion per day. The group has spent VND1.028 trillion to expand the banana growing area to 5,275 hectares by the end of 2018.