People who have idle money are engaging in property speculation, but at the same time many producers seriously lack money, according to Pham The Anh from the Hanoi Economics University.

The government has reported a high 7.02 percent GDP growth rate for 2019. The figure, is encouraging in the context of the global economic decline but the are many latent risks, he said. 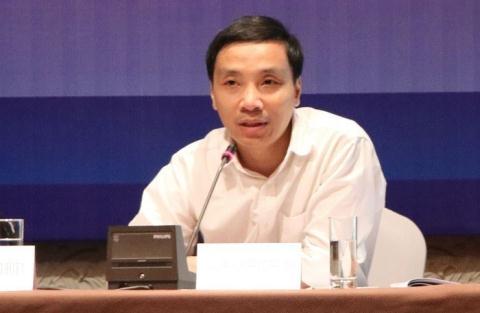 Pham The Anh from the Hanoi Economics University.

Anh noted that positive signs were only seen in the first half of 2019, while bad signs appeared in the second half.

The indexes independent from the data of the state’s statistics agencies all showed this. The PMI (purchasing manager’s index), for example, was high in the first half of the year, but decreased considerably in the second half.

Some other business fields, including real estate, have been experiencing quiet days since the second half of 2019. The real estate market is expected to see further decline in 2020.

Meanwhile, the growth rate of the industry and construction sector in 2019 was still high, but the growth was mainly based on increased mining activities, while the other branches of the sector, including manufacturing industry, water and electricity production and construction, all saw decreases.

The inventory level of the processing and manufacturing industries reached 68.8 percent, which was higher than the safety line (65 percent).

According to Anh, Vietnam wants to change the growth model and strive for an in-depth growth model, but its economic growth is still based on money supply.

Official statistics released by state agencies show that Vietnam’s money supply (M2) and the M2/GDP ratio both far exceed ASEAN countries since 2016. The M2/GDP ratio of Vietnam is about 180 percent.

It is estimated that the M2 increases by VND1,000 trillion a year, of which 50 percent goes to government bonds to cover the state budget deficit and serve domestic roll-over.

VND92 trillion is the amount of money that four state-owned banks, or the ‘big four’, have paid to the state budget since 2014.