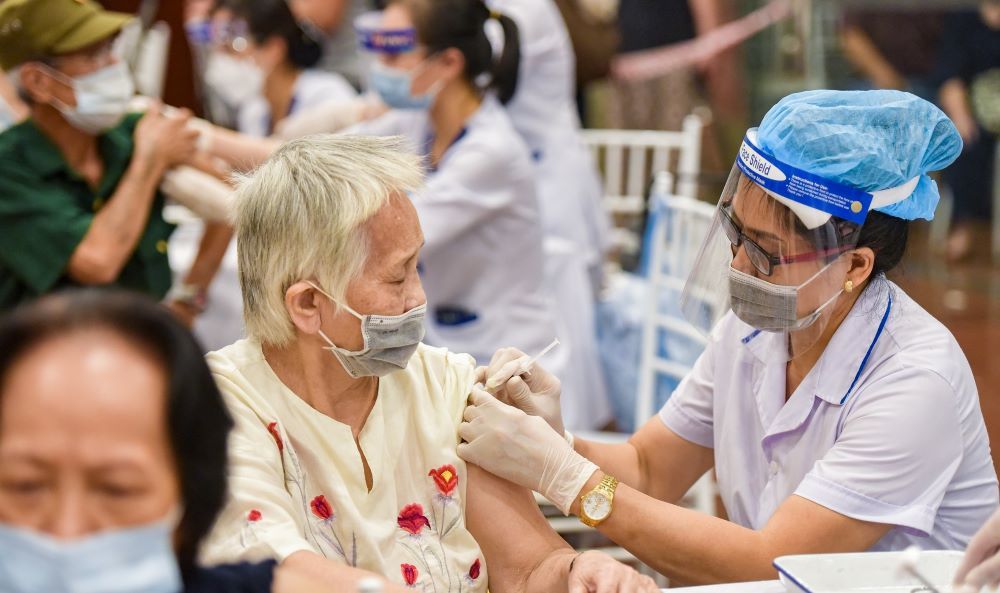 As of January 15, the Covid-19 pandemic has claimed more than 35,000 lives in the country of 100 million population. The fatalities accounted for 1.8% of the total infections, data by the Ministry of Health showed.

As an effective way to curb the outbreak, which is ongoing in almost all parts of the nation, Vietnam has sped up the inoculation campaign that was launched in March 2021. So far, 167 million doses of vaccines have been administered, including 71.5 million people (or 93% of adults aged above 18) have been fully vaccinated. At the same time, the country has provided nearly 14 million booster shots.

Almost all children aged between 12 and 17 have been double dosed and the Southeast Asian country is seeking international experience to vaccinate children at 5-12 years of age.

Vaccination is the key

Vietnam, after suffering the widespread transmission of coronavirus in the ongoing outbreak that flared up in April 2021, vowed to boost the vaccination rate as quickly as possible. However, the initial stage of the immunization campaign was not so easy as it struggled to get vaccines for the people amid the global thin vaccine supply. Quickly, it mobilized all channels to have Covid-19 vaccines, including purchase, diplomacy, and through the global vaccine-sharing scheme COVAX Facility.

Vietnam has provided vaccines free of charge for all people. Prime Minister Pham Minh Chinh reiterated the government’s consistent policy of vaccinating people to protect them and reopen the economy.

In reality, homebound people are provided jabs at home by health workers who are accompanied by voluntary forces.

However, attitude towards vaccination is a factor contributing to the quick and high vaccination coverage in Vietnam as local experts have analyzed. The majority of Vietnamese people are aware of the role of vaccines against Covid-19 and they want to get jabs for their own safety and others.

It can be said that the government’s efforts and people’s sentiment turned Vietnam from the country with the lowest vaccination rate in Southeast Asia in mid-2021 to one of the world’s six leading countries for vaccination coverage in early 2022.

Vaccination is considered one of the key factors for the country to reopen its economy. Such Covid-19 response strategy enabled Vietnam to switch from zero-Covid to flexible adaption to the pandemic.

Under Resolution No.128 dated Oct 12, Vietnam targets to protect people’s lives, mitigate fatalities, and take up recovery plans in the pursuit of the dual goal (containing the virus and developing economy).

In the new strategy, the level of reopening depends on the pandemic classification and the vaccination rate.

Under the new approach, Vietnam steps up efforts to test for the virus in affected and high-risk areas. There is also a progressive lifting of restrictions imposed during lockdowns to resume normal life and to kick-start economic activity. There will still be regulations in place concerning wearing masks, social distancing, and the resumption of schools and activities involving large numbers of people.

Entering 2022, Vietnam still sees a high number of cases daily, around 15,000/day, however, the rate of fatalities dropped to one-third of the peak in August 2021, at around 130 deaths/day now. According to the Ministry of Health, up to 90% of the victims are the old aged above 60 who are unvaccinated or with underlying diseases.

So far, non-essential services like bar, karaoke lounge, discotheque, and spa are allowed to resume in many regions, including Ho Chi Minh City, the country’s largest city and business hub that suffered the most serious loss between June and August 2021.

The Ministry of Health now focuses on taking care of patients with heavy symptoms and treating severe cases while speeding up the vaccination as it did a good job before.

Hanoi is now the most affected area with an average of 3,000 cases/day. But the low rate of fatalities enables the city to continue reopening activities like other parts of the country.

The municipal leaders attributed the low fatality rate to high vaccination coverage. So far, 99% of its adults above 18 are double dosed. Meanwhile, the city is providing jabs to about 17,000 people aged above 50 with underlying diseases.

Chairman of the Hanoi People’s Committee Chu Ngoc Anh emphasized the city’s dual goal of containing the virus and flexibly adapting to Covid-19 to smooth production and maintain social welfare.

The chairman said at a government meeting last week that the city is preparing for the scenario of 100,000 infections by mobilizing all central hospitals operating citywide to join the treatment of Covid-19 patients. At the same time, more than 3,200 teams are supporting about 44,000 patients treated at home (accounting for 80% of the city’s total cases).

Young doctors, medical students, and voluntary forces are extending assistance to those treated at home to ensure drugs and oxygen in time, he said, adding that the efforts keep Hanoi’s death rate low.

In the fresh outbreak that broke out in April 2021, Hanoi has reported nearly 90,000 infections so far.

In the latest move, 23 districts and towns in Hanoi have been classed as “yellow zones” (medium risk) and the remaining seven have been labelled “orange” (high risk). It means that no area in the city is listed “green” which is safe enough to allow all activities to go on as normal.

Vietnam’s great efforts in vaccine diplomacy helped obtain commitments for over 100 million vaccine doses in 2021, which allowed it to launch its biggest ever vaccination campaign.